Most applications, including these, launch very quickly, with Parallels having a slight edge. Even so, launches are so fast on both virtualization products that even the worst case was very usable. 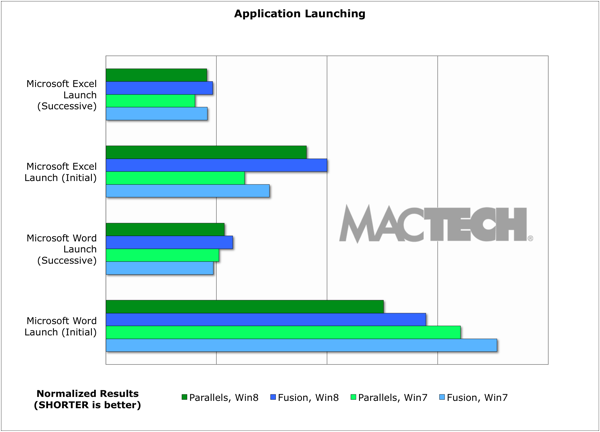 In all cases, launch times were quite fast from a user experience. It’s nice to see that all the Microsoft Office applications launch (typically) in a few seconds under both Parallels Desktop and VMware Fusion. Often, it felt nearly instantaneous to a user on the successive launches.

In many cases, applications today perform so well and so fast, even under virtualized environments, that anyone would be pleased for small documents and activities. We focused our efforts on one of the more demanding and used applications: Internet Explorer 9.

Microsoft has a series of public benchmarks for seeing how well a browser performs. See http://ie.microsoft.com/testdrive/Views/SiteMap/ for all kinds of demos and performance tests. We chose a set of tests that took enough resources to measure well and had a consistent method of measurement. 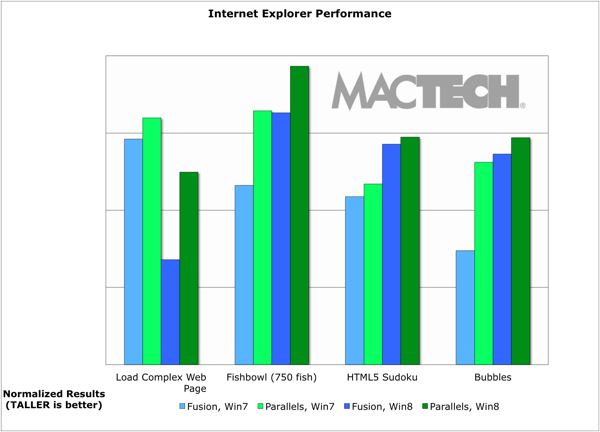 Across the board, Internet Explorer 9 performed better on Parallels Desktop than it did on VMware Fusion. Only the Sudoku test was close. All the rest were a clear win for Parallels.

Because the web is becoming more and more an application platform, we chose to focus on more advanced Web 2.0 technologies rather than simple html.