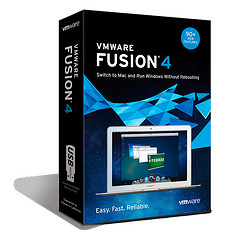 The long awaited VMware Fusion 4 ships today. VMware promises the new version to not only be faster but have a variety of new features that support Mac OS X Lion.

VM Fusion 4 boasts more than 90 new features and is optimized for multi-core Macs. Using the latest version on Lion, you can choose which Windows programs to add to Launchpad, experience them in Mission Control, view them in full screen or switch between them using Mac gestures. And, you can limit spotlight to the Windows apps you choose as well.

VMware Fusion 4 has been engineered to run Windows and Mac applications side-by-side with incredible speed and reliability, says Lee. As a 64-bit Cocoa application, it is optimized for today’s multi-core Macs and delivers 3D graphics up to 2.5-times faster.

Lee says the new version offers an even more “Mac-like” experience thanks to a new settings menu to a redesigned virtual machine library and snapshot menu. VMware says the snapshots are managed in a way similar to backups in Apple’s Time Machine. The snapshot and autoprotect are designed for both novices and power users.

There’s a new DMG/disc design so you can drag and drop to install VMware Fusion to your folder of choice. You can double-click to upgrade from earlier versions of VMware Fusion. You can even drag and drop to the Trash if you’d like to remove the software; no uninstaller is needed. A USB key is included with the box product so VMware Fusion 4 can be installed on on Macs without optical drives (such as the MacBook Air).

There’s a new “iTunes inspired” Welcome to VMware Fusion to get you up and running quickly. With Fusion 4, you can show more virtual machines at once without needing to scroll. Start a virtual machine, and the virtual machine library goes away automatically.

VMware Fusion sports a new, smaller default toolbar. The ability to remove the status bar combined with the smaller toolbar purportedly gives you more 44% more work space — a huge win for those with smaller screens. Other new features include:

° The ability to add active device status and device settings to toolbar;

° The ability to quickly show and hide active device status and device settings;

° An overlay to make it clear which virtual machine settings you are changing;

° A new General overview category with insight on disk space used and a clean up option;

° The Hard Disk category has been simplified;

° Improved 3D graphics performance (“up to 2.5X faster on Lion”according to VMware);

VMware Fusion’s migration assistant for Windows is “designed to make it easier for users to transfer their entire PC to a Mac.” VMware Fusion 4 is available until the end of the year for a promotional price of $49.99, compared to the suggested retail price of 79.99. Customers who have purchased VMware Fusion 3 on or after the July 20, 2011, are eligible for an electronic upgrade to VMware Fusion 4 at no additional cost. Volume pricing for corporate users is available from select resellers and http://www.vmware.com/fusion .

VMware Fusion 4 — a 64-bit Cocoa app — is available immediately for download and purchase from the VMware web site. VMware Fusion box products will be available at key resellers including Apple, Apple.com, Amazon.com, Best Buy, Fry’s Electronics and other stores in the coming days. VMware Fusion is available in English, German, French, Italian, Spanish, Simplified Chinese and Japanese. No virtualization products are not available from the Mac App Store.