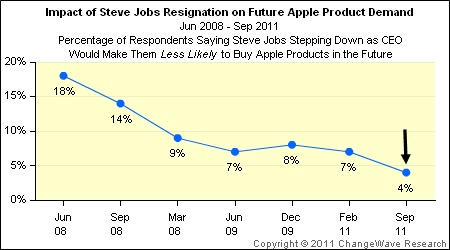 The resignation of Steve Jobs as CEO of Apple is having little impact on the demand for Apple products, according to a new survey from ChangeWave Research (http://www.changewaveresearch.com). The Sept. 6-12 survey of 2,297 consumers shows only 4% say Jobs’ resignation makes them “less likely” to buy Apple products in the future, while 89% say it’s having “no effect” on their purchasing of Apple products.

When asked a similar question during Steve Jobs first leave of absence back in 2008, nearly one-in-five respondents (18%) said they would be “less likely” to buy Apple products if Jobs stepped down. Since then ChangeWave has asked this question on several occasions, and over this time period the impact of Steve Jobs stepping down has clearly lessened in the minds of consumers.

The results suggest that Jobs’ previous absences have had an “inoculating” effect that over time has allayed consumer concerns on whether the company could operate at the same level without Jobs at the helm. Two recent ChangeWave surveys on tablet demand provide additional evidence that Apple product demand has not been affected to date by the loss of the iconic CEO.

An Aug.10-29 ChangeWave survey of 1,618 corporate IT buyers shows the Apple iPad remains the overwhelming choice for planned tablet purchasers. Among companies planning to purchase tablets for their employees next quarter, 80% say they’ll buy iPads — unchanged since the previous survey.

A second ChangeWave survey of 2,969 consumers during August also looked at tablet demand trends. And even as competitors flood the market with their own tablets Apple continues to dominate, with 85% of planned buyers saying they’ll get an iPad.

A key reason for the iPad lead is found in its customer satisfaction rating — 70% of consumer iPad owners say they’re “very satisfied” with their tablet device. That dwarfs the “very satisfied” rating of all of the other manufacturers combined (42%), says ChangeWave.

Samsung to Apple: let’s settle this