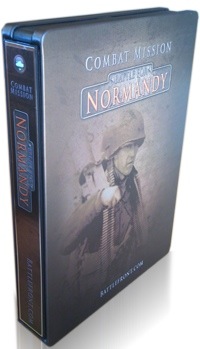 You can pre-order CM:BN in a special SteelBook Limited Collector Edition for US$55 (plus shipping and handling). It sports a retail-style package, fitting up to four discs inside (the game disc as well as up to three future modules that can be purchased separately at a later time) as well as the full, printed 200-page manual.

Combat Mission: Battle for Normandy is scheduled for release within the next 14-21 days. The game recreates the experience of tactical land warfare in Western France during World War Two.