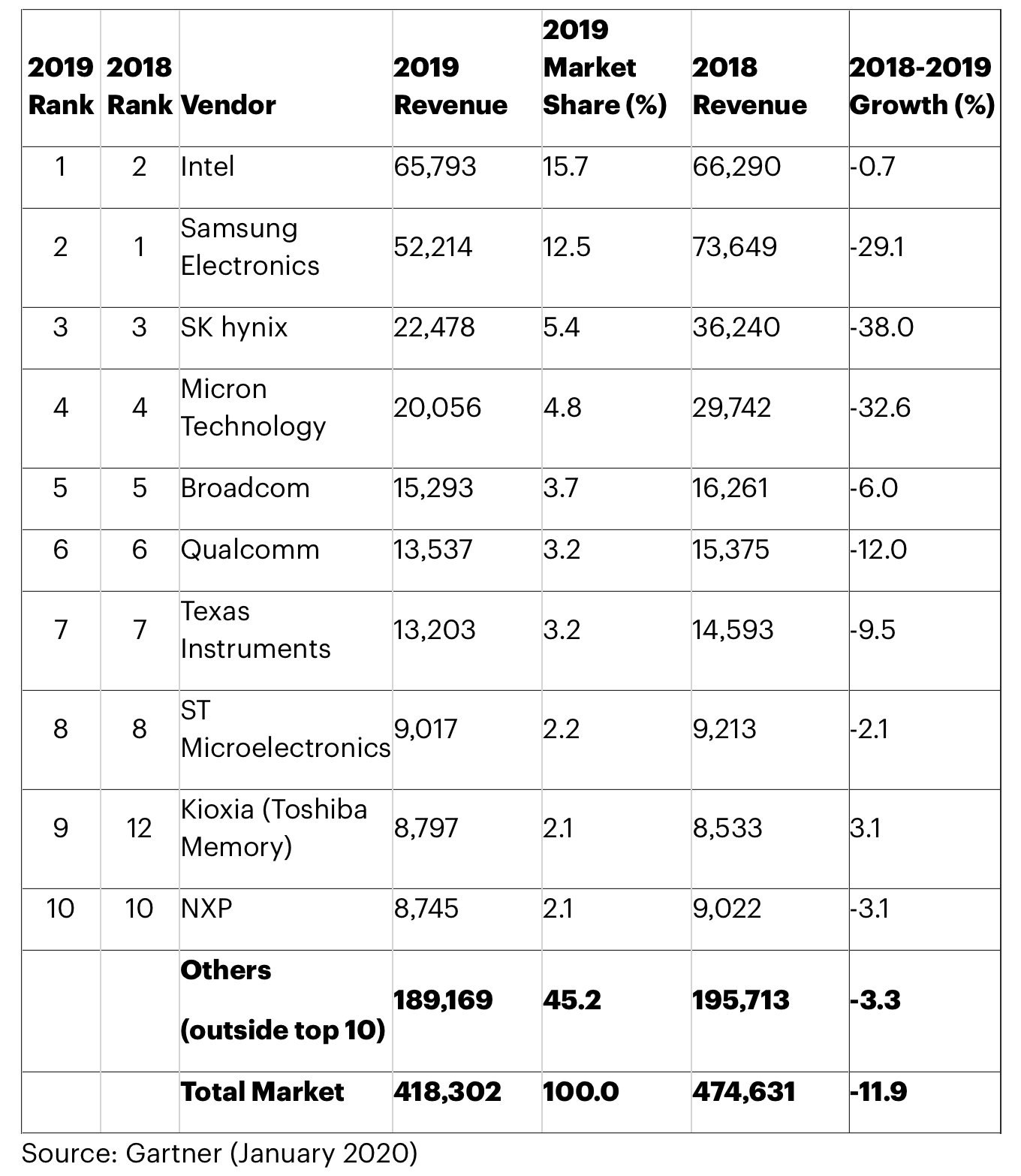 Worldwide semiconductor revenue totaled $418.3 billion in 2019, down 11.9% from 2018, according to preliminary results by Gartner, Inc. (www.gartner.com). Intel regained the No. 1 position in the market as the downturn in the memory market negatively impacted many of the top vendors, including Samsung Electronics, the No. 1 vendor by revenue in 2018 and 2017, adds the research group.

“The memory market, which accounted for 26.7% of semiconductor sales in 2019, experienced a 31.5% decline in revenue in 2019,” said Andrew Norwood, research vice president at Gartner. “Within memory, DRAM revenue declined 37.5% due to an oversupply that started at the end of 2018 and lasted throughout 2019. The oversupply was caused by a sudden fall in demand from the hyperscale market. This revealed excessive OEM inventory levels that took the first half of the year to correct. Excessive inventory at DRAM vendors in the second half of 2019 pushed pricing lower and resulted in an average selling price (ASP) decline of 47.4% in 2019.”

Intel reclaimed its position as the No. 1 global semiconductor vendor by revenue in 2019, recovering the position from Samsung Electronics, which held it for the past two years. Intel’s semiconductor revenue declined 0.7% in 2019, driven by a slowdown in the server market, an ongoing constrained CPU supply and the 4Q19 sale of its cellular modem business to Apple.

Samsung dropped to the No. 2 position due to the downturn in the memory market. Like all memory vendors, the company struggled with oversupply and falling prices in both the DRAM and NAND flash markets. Samsung’s memory revenue, which accounted for 82% of its sales, declined 34% in 2019.

Within the memory segment, NAND flash experienced a milder 2019 downturn than the overall memory market, with a revenue decline of 23.1% due to elevated levels of inventory at the end of 2018 that were exacerbated by sluggish demand in the first half of 2019. The NAND market began to stabilize in July 2019, aided by a power outage in the fabs jointly owned by KIOXIA and Western Digital. This power outage acted as a catalyst to clean out vendor inventories and prompted prices to increase from unsustainable lower levels. Gartner expects the recovery in NAND will continue in 2020 due to low supply bit growth being overwhelmed by strong demand from solid-state drive (SSD) adoption and the ramp up of 5G smartphones.

Revenue growth of other device categories varied between analog products’ decline of 5.4% and optoelectronics’ growth of 2.4%. Analog suffered due to weak end-equipment markets, especially industrial and legacy automotive, as did other broad-based commodity devices, such as microcontrollers and other logic. Optoelectronics recorded the best performance of any device category due to the increasing number of cameras in smartphones.

“In 2020, we expect to see semiconductor market revenue increase after the high inventory clearance to drive up the chip ASP, especially in the memory sector,” said Mr. Norwood. “The U.S.-China trade war seems to be easing as we move into 2020. However, during 2019 the U.S. added several Chinese companies, including Huawei, to the Entity List restricting the sale of U.S. components. The immediate impact was to push Huawei into looking outside the U.S. for alternative silicon suppliers, with wholly owned HiSilicon at the top of the list as well as alternative suppliers based in Japan, Taiwan, South Korea and China. This will be an area to watch in 2020.” 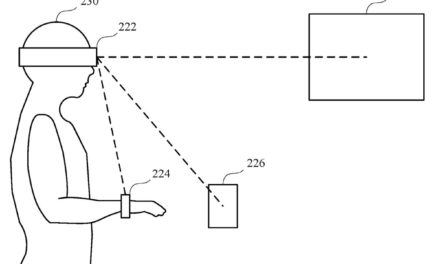 ‘Apple Glasses’ could be able to unlock your Mac, iPhone, iPad