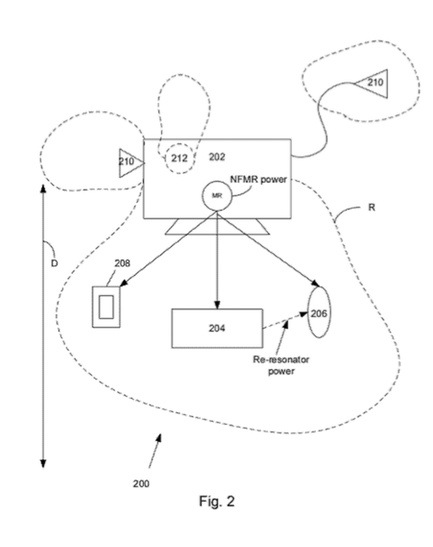 A new patent (2012303980) at the U.S. Patent & Trademark Office shows that Appel is looking into “realistic and practical” wireless charging. The patent is for “wireless power utilization in a local computing environment.”

“Although well suited for applications requiring relatively low power (on the order of mW), this same process is not suitable for those applications requiring either more power (on the order of at least a few watts to hundreds of watts) or where the power source and power receiver are located further apart from each other, such as a few inches to a few feet.

“However, it has been discovered that useable power can be transferred wirelessly from a power source to a receiver located within a distance referred to as a near field. By near field it is meant that within a distance a few times larger than that of both objects involved in the transfer (about one meter or so for most applications) a relatively large amount of power (at least on the order of a few watts) can be transferred between a wireless source device and a receiver with an acceptable efficiency.

“In this way, a realistic and practical approach to wireless transferring useable amounts of power over distances suitable for limited applications can be realized. Typically, each battery powered device such as a wireless electronic device requires its own charger and power source, which is usually an alternating current (AC) power outlet. Such a wired configuration becomes unwieldy when many devices need charging.

“Various over-the-air or wireless power transmission between a transmitter and a receiver coupled to the electronic device to be charged have been carried out that generally fall into two categories. One category is based on the coupling of plane wave radiation between a transmit antenna and a receive antenna on the device to be charged. The receive antenna collects the radiated power and rectifies it for charging the battery. Antennas are generally of resonant length in order to improve the coupling efficiency. This approach suffers from the fact that the power coupling falls off quickly with distance between the antennas, so charging over reasonable distances (e.g., less than 1 to 2 meters) becomes difficult.

“Other techniques rely upon inductive coupling between a transmit antenna embedded, for example, in a “charging” mat or surface and a receive antenna (plus a rectifying circuit) embedded in the electronic device to be charged. This approach has the disadvantage that the spacing between transmit and receive antennas must be very close (e.g., within thousandths of meters). Though this approach does have the capability to simultaneously charge multiple devices in the same area, this area is typically very small and requires the user to accurately locate the devices to a specific area.

“Furthermore, what is desired are methods, systems, and apparatus for efficient and user friendly interaction between peripheral devices in a wirelessly powered local computing environment. In particular, in order to enhance the user’s experience and provide efficient power utilization, cooperation between the plurality of peripheral devices in the context of the wireless power environment is desired.”

ADC publishes new article on Audio Units to its site