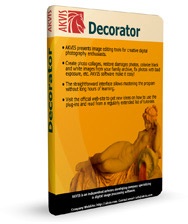 Akvis has updated Akvis Decorator, a Mac compatible app that lets you apply a new texture and color to an object while preserving its volume, to version 3.0. It’s now available in a standalone version, as well as a plug-in.

Decorate 3.0 also adds selection tools have been added. There’s a variety of patterns in the built-in Texture Library that you can apply. Or you can apply your own textures; just load an image as a texture file into the library.