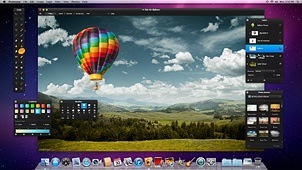 In addition to Pen, Freeform Pen, Convert and Path Selection tools, Pixelmator also includes pre-drawn shape tools for adding triangles, lines, circles, rectangles, and even custom shapes from the new Shapes palette into compositions. Fill and stroke settings for created shapes, as well as shadows, can be adjusted in the new Shape Settings palette. The drawing tools are designed for creating buttons, icons, web page elements, illustrations or any other items for use in image compositions.

The Content-Aware Fill technology in Pixelmator allows users to “magically” get rid of unwanted elements in images, as if they never existed, says Dailide. By using either the new Healing Tool or the selection tools, you can select wrinkles, blemishes, image damage or any other details in images, then let Pixelmator fill the selected area with similar nearby image content.

The new retouching tools in Pixelmator include: a Sponge Tool for adding more color or taking color away from areas of an image by painting on them; Burn and Dodge tools, for naturally darkening or lightening areas of an image; and a Red Eye Tool for either automatically or manually  fixing the red-eye effect in images.

The new Smudge Tool allows smearing paint, or rubbing out blemishes or any other details in images by using any brush tip.

Other new features of Pixelmator 2.0 Chameleon include a cleaner interface, a new Eyedropper Tool, a new info bar, a tool options bar, a customizable Tools palette, a new Type Tool, a Pixel Tool, and other minor improvements.