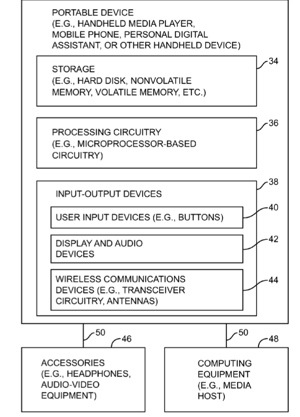 An Apple patent (number 7916089) for antenna isolation for portable devices has appeared at the US Patent & Trademark Office. It shows that Apple is far from finished with antenna implementations in future iPhones.

“To satisfy consumer demand for small form factor wireless devices, manufacturers are continually striving to reduce the size of components that are used in these devices. For example, manufacturers have made attempts to miniaturize the antennas used in handheld electronic devices.

“A typical antenna may be fabricated by patterning a metal layer on a circuit board substrate or may be formed from a sheet of thin metal using a foil stamping process. Antennas such as planar inverted-F antennas (PIFAs) and antennas based on L-shaped resonating elements can be fabricated in this way. Antennas such as PIFA antennas and antennas with L-shaped resonating elements can be used in handheld devices.