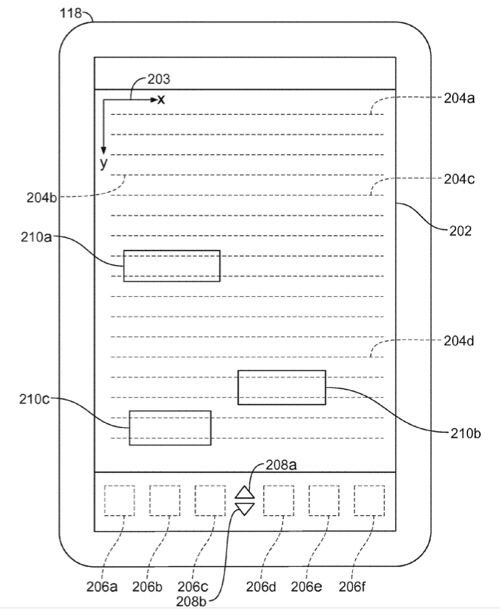 Apple is at least considering a pen/stylus-based input system (as well as voice recognition) for future Macs. A patent (number 7894641) for a method and apparatus for acquiring and organizing ink information in pen-aware computer systems has appeared at the US Patent & Trademark Office.

Upon the occurrence of an ink phrase termination event, the ink manager notifies the handwriting recognition engine and organizes the preceding ink strokes into an ink phrase data structure. The ink manager may also pass the ink phrase to an application executing on the computer system that is associated with the ink information, and it, in response, may return a reference pointer and a recognition context to the ink manager. The reference pointer and recognition context are then appended to the ink phrase data structure. The inventors are Larry S. Yaeger, Richard W. Fabrick II and Giulia M. Pagallo.

These input systems typically include a hardware device called a ‘tablet’ that is connected to the serial port of the computer. The tablet may include an integrated display screen so that the tablet can serve as both an input and an output device. When operating as an input device, the tablet senses the position of the tip of the pen as it moves across the tablet surface and provides this information to the computer’s central processing unit. To provide the user with visual feedback as the pen moves, the computer typically displays ‘ink’ (i.e., a path of pixels tracing the pen’s movement) simulating the ink dropped by a real pen. If the tablet has an integrated display screen, this electronic ink is typically drawn directly beneath the tip of the moving pen. For an opaque, input-only tablet, the ink is typically drawn on a normal computer screen to which the tablet has been ‘mapped.’Whether integrated with the tablet or not, the screen typically displays standard computer-generated information, such as text, images, icons and so forth.

“In addition to the tablet, pen-based computers also have a software pen driver that interfaces with the tablet and periodically samples the position of the pen, e.g., 100 times a second. The pen driver passes this ink data to an ink manager that organizes it and coordinates the recognition process. Specifically, the ink manager organizes the ink data into ink strokes, which are defined as the ink data collected until the pen is lifted from the tablet. The ink manager passes the ink strokes to a recognizer that employs various tools, such as neural networks, vocabularies, grammars, etc., to translate the ink strokes into alpha-numeric characters, symbols or shapes. The recognizer may generate several hypotheses of what the ink strokes might be, and each hypothesis may have a corresponding probability. The hypotheses are then provided to an application program which may treat the recognized ink data as an input event.

“First, the application can choose only to receive the recognition results, thereby allowing the system to process and organize the ink data based on its default settings and to interface with a default recognizer. Alternatively, the application program can request the ‘raw’ ink data and process it in any number of ways. For example, it can buffer the data to delay recognition or it can throw the data away. This ink data is provided to the application on a stroke-by-stroke basis. If the application wishes to have the data recognized, it passes the raw ink data to the recognizer itself. Any special recognition requirements, such as field-specific recognition contexts (e.g., name, address, social security, or other types of input fields), and any unique affiliations between ink input sessions and specific input fields must also be determined on a stroke-by-stroke basis, typically based upon the first stroke that is received.

“This collection and organization of ink data into pen input sessions on such a stroke-by-stroke basis has several disadvantages. As noted, to associate ink data with a particular data entry field, the system generally relies solely upon the location of the first ink stroke entered by the user. If a pen input area is declared and subsequent strokes extend outside of that area, the system will not associate those strokes with the data entry field, even though the user may have intended these subsequent ink strokes to be a part of that data entry field. Further, if that first stroke is only slightly misplaced (e.g., if the cross-bar of a capital ‘T’ is drawn first and written too high), the entire subsequent session may be affiliated with the wrong input field. Associating ink with the wrong input field may result in the recognition results flowing to the wrong place, and, if a special recognition context is used for each input field (e.g., name vs. address vs. social security fields, etc.), the wrong context may be applied during recognition.

“Even systems that attempt to improve this situation by using each stroke to determine the input field anew, such as the Apple Newton from Apple Computer Inc. of Cupertino, Calif., can suffer from failure modes that make the situation difficult both for end users and for application developers. For example, a word that accidentally spans two input fields even a tiny amount (due, for instance, to a stray ascender, descender, crossbar, or dot) may be broken up into multiple sessions, causing misrecognition and invalid data entries that must be manually corrected.

“Accordingly, a need exists for improving the way in which ink data is organized so as to facilitate the recognition process and also to improve the association of ink data to particular data entry fields.

“The present invention, in large part, relates to the observation that client applications and handwriting recognition software in pen-based computer systems can make far more accurate ink-related decisions based on entire ink phrases, rather than individual ink strokes. Accordingly, the invention is directed to an ink manager that is designed to organize ink strokes into ink phrases and to provide these ink phrases to client applications. In the illustrative embodiment, the ink manager interfaces between a pen-based input device, one or more applications (pen-aware or not) and one or more handwriting recognition engines executing on the computer system. The ink manager acquires ink information, such as ink strokes, entered at the pen-based input device, and organizes that information into ink phrases.

“Significantly, by passing the as yet un-recognized ink phrase to the application immediately upon phrase termination (step 2 above), the ink manager allows the application to make specific input field and context determinations on a more suitable unit of data than previous systems–a phrase, rather than a stroke. Consequently, the system can associate the user’s ink data with the input fields intended by the user more consistently, even if one or more ink strokes (including the first ink stroke) is wholly or partially outside of the input field. The system can also recognize the ink data more accurately due to the use of the most appropriate recognition context, again as determined by the application based on the ink phrase.

“While the ink manager may allow alternative methods of data handling, including stroke-based and even point-based ink accumulation by the client application as well as input-area-based phrase termination, the organization of ink information into ink phrases frees pen-aware applications from the low-level ink collection and handling process, improves the correlation of ink information to specific areas on the pen-based input device, and improves the recognition process.”