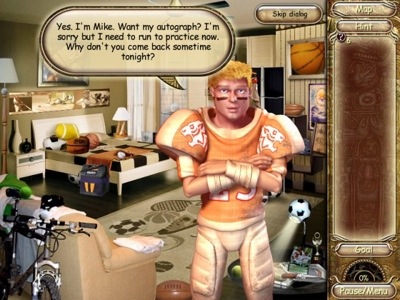 Nevosoft (http://nevosoft.com/) has released two titles on the Mac App Store: Laura Jones and the Gate of Good and Evil and Laura Jones and the Secret Legacy of Nikola Tesla. These adventure games — whic cost US$4.99 each — offer a mixture of hidden object searches, inventory-based puzzles and mini-games.

Certain parts of the screen can be zoomed in on, and occasionally you will also get spot-the-difference puzzles, or have to move objects aside to uncover the item you are seeking. They require Mac OS X 10.6 or higher and

Here’s how the games are described: “The first game starts when Laura Jones gets a letter about a powerful ancient talisman. The universe Evil is trying to possess sacred powers and Laura saves the world from fatal destruction. The sequel’s story begins when Laura heads to Europe and discovers a letter from the famous 20th century inventor Nikola Tesla. The note provides clues to the whereabouts of several parts that can be used to activate one of Tesla’s lost inventions – a machine capable of providing a clean energy alternative to oil.”