Survey: Verizon iPhone will have ‘major impact’ on US wireless service providers 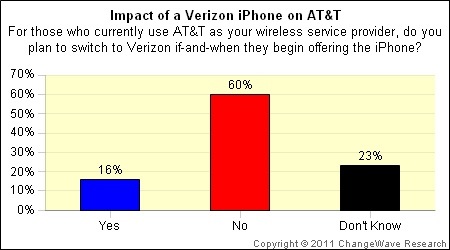 With the Verizon iPhone release now set for early February, the ChangeWave research group (http://www.changewave.com) recently surveyed 4,050 consumers on their impressions and future plans regarding their wireless providers, including customer satisfaction, loyalty and demand trends going forward. The survey focused on the impact of a Verizon iPhone on the U.S. wireless service providers — and found the impact would be major.

First, ChangeWave asked survey respondents how likely they were to change their wireless service provider in the next 90 days. A total of 10% said they plan on switching providers — two points higher than a previous ChangeWave survey in September and the highest churn level of the past 18 months.

What’s behind the weakening loyalty of AT&T customers? First, better than two-in-five likely switchers from AT&T cite poor reception/coverage (42%) as their top reason for leaving, followed by dropped calls (27%).

Secondly, the weakening loyalty of AT&T wireless customers is directly attributable to the upcoming release of a Verizon iPhone. To gauge how many AT&T customers are going to switch to Verizon when they begin offering the iPhone, ChangeWave asked: “For those who currently use AT&T as your wireless service provider, do you plan to switch to Verizon if-and-when they begin offering the iPhone?”

A total of 16% of AT&T subscribers say they’ll switch to Verizon once it begins offering the iPhone. Another 23% say they don’t know if they’ll switch.

Importantly, current Apple iPhone owners are the most likely group of all to switch, with more than one-in-four (26%) saying they’ll leave AT&T for Verizon.

Note that among all AT&T subscribers planning to switch, two-in-five (41%) say they’ll do it within the first three months of the iPhone’s release — and another 31% within the first year. Despite the seemingly inevitable hemorrhaging of AT&T’s subscriber base, ChangeWave says there was one bright spot for the wireless giant — a significant improvement in its dropped call rating.

While AT&T continues to struggle in this very important area and trails Verizon by a wide margin, it has made significant advances since our previous survey — improving from its all-time worst 6.0% rating last September to 4.7% in the ChangeWave survey.

The findings suggest AT&T is now taking concrete steps to try to improve long-standing service issues. But can it do so quickly enough to forestall large-scale defections to Verizon?
Not according to the ChangeWave survey results. “The Verizon iPhone is causing a major transformational shift in the wireless industry, and for now the momentum clearly favors Verizon,” says the research group.