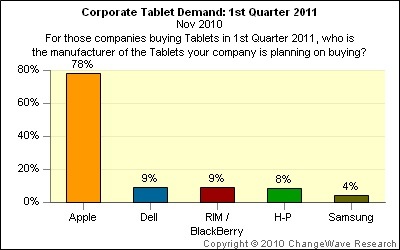 The number of corporations arming workers with tablets will double early next year with the iPad dominating the market, the ChangeWave (http://www.changewave.com) research firm says, citing its recent survey of more than 1,600 IT buyers.

In terms of current usage, 7% of corporate respondents now say their company provides employees with tablet devices, up one point since ChangeWave’s previous survey in August. The research group says the iPad (82%) remains by far the most popular tablet for business purposes. H-P (e.g., Slate; 11%) and Dell (e.g., Streak; 7%) are also showing some traction among corporate users — but both remain far behind Apple’s overwhelming share of the market.

Similar to what ChangeWave has seen in other Apple product areas, the iPad’s satisfaction ratings are outstanding — with 69% of corporate users saying their company is very satisfied and another 28% somewhat satisfied with the Apple device, says ChangeWave. And despite the flood of new tablets hitting the market, the iPad remains the overwhelming choice of business buyers going forward — with nearly four-in-five (78%) corporate respondents saying their company plans to purchase Apple tablets.