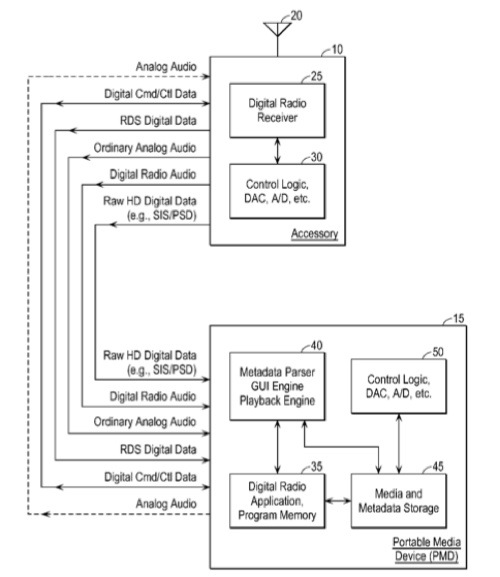 A new Apple patent (number 20100150276) at the US Patent & Tradmark Office shows that the company may be planning HD radio features in upcoming iPhones, iPads and iPod. The patent is for digital radio tagging using an RF tuner accessory.

According to the patent, an accessory having an RF tuner for digital radio, such as HD radio, can be in communication with a media player such as a portable media device (“PMD”). The user can be given the ability to command the accessory to provide raw digital data, the ability to scan only for stations having digital audio content (or for all available stations), the ability to provide station lists of stations having digital audio content (or all available stations), and the ability to request and store metadata beyond that for stations actually being listened to provide enhanced search capabilities. Enhanced metadata and searching can provide the listener the ability to refine station choices without having to listen at length to any particular station, and further can facilitate tagging broadcast tracks for subsequent access and/or purchase. The inventors are Jason J. Yew, Allen P. Haughay and Robert J. Walsh.

Here’s Apple’s background on the invention: “There are a number of technologies whereby AM and FM radio stations are able to transmit digital information along with their analog signals. This is typically done by modulating low-energy sidebands within the normal station bandwidth using known digital modulation schemes.

“An early technology deployed in Europe is known as Radio Data System (‘RDS’); a U.S. counterpart, officially known as Radio Broadcast Data System (‘RBDS’), is very often also referred to as RDS. In an RDS broadcast, a small amount of digital data relevant to the broadcast is included with the analog broadcast. The information (i.e., metadata) is structured (differently in Europe and the U.S.) to include such information as time, track/artist information, station identification, and program type (e.g., news, sports, weather, talk, top 40, country, jazz, classical, and rhythm and blues). It will be appreciated that the RDS system, while not improving the audio quality or providing additional program content, provides useful information to the listener.

“Another set of technologies provide digital audio, in addition to the metadata about the content being played. High-quality audio can be transmitted using less bandwidth than conventional AM or FM radio by digitally encoding the audio stream at the source, and then decoding it at the destination. There are a number of formats for digital audio, but a particular in-band on-channel (‘IBOC’) technology developed by iBiquity Digital Corporation (‘iBiquity’) has been selected as a standard by the U.S. Federal Communications Commission (FCC). The latest version of the standard is officially referred to as In-Band/On-Channel Digital Radio Broadcasting Standard NRSC-5A promulgated by the National Radio Systems Committee.

“As stated in Wikipedia, ‘HD Radio technology . . . enables AM and FM radio stations to simulcast both digital and analog audio within the same channel (a hybridized digital-analog signal) as well as add new FM channels and text information.’ HD Radio, at least in stylized forms, is a registered trademark of iBiquity. It is also viewed by some as an acronym for “Hybrid Digital” radio technology. Thus, iBiquity’s technology is a species of IBOC technology for transmitting digital radio and analog radio broadcast signals simultaneously within the frequency band allocated to the analog radio station.” 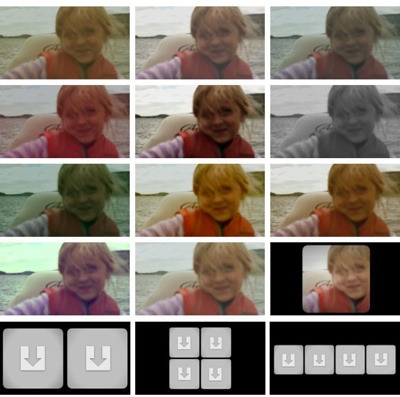