SAN FRANCISCO–September 12, 2006–Apple today introduced the all-new
iPod nano with a new aluminum body, an incredible 24 hours of battery
life and more than twice the music capacity for the same price as the
previous generation. The new iPod nano features Apple’s innovative
Click Wheel and an even smaller, thinner and lighter design available
in silver, pink, green, blue and black.

“iPod nano is the world’s most popular digital music player, and
we’ve completely redesigned it to make it even better,” said Steve
Jobs, Apple’s CEO. “The all-new iPod nano gives music fans more of
what they love in their iPods–twice the storage capacity at the same
price, an incredible 24 hour battery life and a gorgeous aluminum
design in five brilliant colors.”

With a stunning aluminum enclosure available in five brilliant
colors, there’s an iPod nano to match everyone’s individual style.
The second generation iPod nano is even more compact than the
original and has a brighter, more vibrant display perfect for viewing
album art and up to 25,000 photos. Intuitive new features such as
Search and Quick Scroll make it even easier for music fans to find
exactly what they are looking for and enjoy their music on the go,
and with seamless integration with iTunes 7 and the iTunes Store
(www.itunes.com), the new iPod nano lets customers choose from over
three million songs from the world’s most popular digital music store.

Apple is also unveiling new accessories designed for the second
generation iPod nano, including lanyard headphones, an armband, a
dock, and a new incredibly compact USB power adapter which at almost
half the size of the previous USB power adapter is perfect for
charging your iPod while traveling. The new iPod nano features the
30-pin iPod dock connector allowing it to work effortlessly with an
incredible range of third-party products, from home stereo speakers
to cars featuring iPod integration. There are now more than 3,000
accessories available for the iPod. The second generation iPod nano
also works seamlessly with the Nike + iPod Sport Kit, and provides
support for voice recording accessories.

New optional accessories designed for the second generation iPod nano
with the following suggested retail prices include: lanyard
headphones for $39 (US), armband for $29 (US), iPod nano Dock for $29
(US), and an iPod USB power adapter for $29 (US).

* Battery life and number of charge cycles vary by use and settings.
See www.apple.com/batteries for more information. Music capacity is
based on four minutes per song and 128-Kbps AAC encoding; actual
capacity varies by content. Photo capacity is based on iPod-viewable
photos transferred from iTunes.

Apple ignited the personal computer revolution in the 1970s with the
Apple II and reinvented the personal computer in the 1980s with the
Macintosh. Today, Apple continues to lead the industry in innovation
with its award-winning desktop and notebook computers, OS X operating
system, and iLife and professional applications. Apple is also
spearheading the digital music revolution with its iPod portable
music players and iTunes online music store. 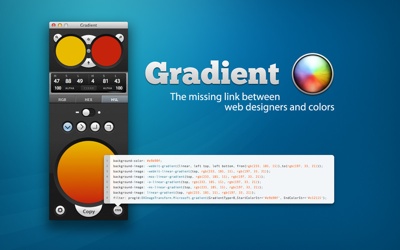 Gradient for OS X is new tool for web designers