PORTLAND, OR February 2, 1999 Zat, Inc., a provider of
standards-based visual development environments and authoring tools,
today announced a preview release of the first authoring tool for
Internet applications that enables development of both server- and
client-side applications by non-programmers. Called Spin, the new
product leverages the simplicity of the JavaBeans architecture and a
revolutionary authoring technology to make it possible for
professionals such as web designers and businesspeople to create
interactive, distributed applications for Ecommerce, intranets,
entertainment, and education.

Spin is the first authoring tool to use Java as a scripting language,
combining the ease-of-use of an authoring system with the power and
flexibility of a full programming system. Non-programmers can create
custom JavaBeans components without programming and integrate them
into distributed applications. Programmers have the full power of the
Java language available to them to develop specialized applications.

The use of open standards such as Java and the JavaBeans component
architecture allows Spin to overcome the limitations imposed by other
authoring tools. These tools typically use a proprietary scripting
language, resulting in non-portable applications, and offer few
mechanisms to extend and adapt their capabilities. The complexity of
CORBA and ActiveX/COM, the other component architectures, limits
their use almost exclusively to programmers.

Spins intuitive authoring architecture is optimized for developing
distributed applications for the Internet. Users work with
components, called “actors,” and define “behaviors” for the actors.
An actor is an arbitrary JavaBeans component; for example, a cartoon
character, and a “behavior” might define how high that character
jumps.

Actors and their behaviors are contained in “capsules,” higher-level
objects that contain one or more components. Capsules, which can also
contain other capsules, break a large project into smaller modules,
easing both development and maintenance.

Spin provides an interactive editing mode for the client side of an
application. This allows users to see immediately the effect of an
editing change in an application, rather than switching back and
forth between “edit” and “run” modes. On the server side, users can
set breakpoints and single-step through an application, a first for
an authoring tool. Spin is also the first Internet application
authoring system to include an integrated web application server,
making it much easier to author and debug the server side.

Spin is a completely standards-based, open-system. Applications
developed with Spin are cross-platform, and portable to any operating
system running the Java Virtual Machine, including Win95, WinNT,
Macintosh, and major variants of UNIX. Spin also offers complete
access to the entire universe of JavaBeans being produced by third
party developers.

Spin Developer Preview Release is priced at $495 and is available
immediately in limited quantities. Purchasers of the preview release
will receive a free upgrade to Spin Version 1.0, available in late
summer, 1999. The estimated retail price of Spin 1.0 is $1,495.
Multi-user licenses for Spin are also available. The product supports
Win95, WinNT, and Macintosh as development platforms. Applications
developed with Spin can be deployed on any operating system that
includes a Java Virtual Machine.

Zat, Inc. is a provider of standards-based visual development
environments and development tools for non-programmers and software
developers. Zat was founded in 1997 by Dr. Wm Leler and Mr. Philip
Goward. Dr. Leler is a former software developer and manager at
Autodesk, Tektronix Research Labs, Cogent Research, and Texas
Instruments. Mr. Goward is a former manager at ParcPlace Systems and
Presidio Systems and developer of several successful software
products. The company is privately funded and headquartered in
Portland, OR. Zat can be contacted at 503-228-6225, info@zat.com, or
at http://www.zat.com. Screen shots of Spin are available on the Zat
web site. 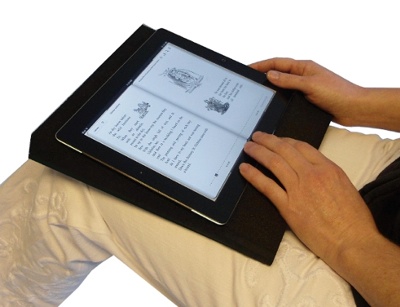 TAB Rest is new wrist rest for the iPad