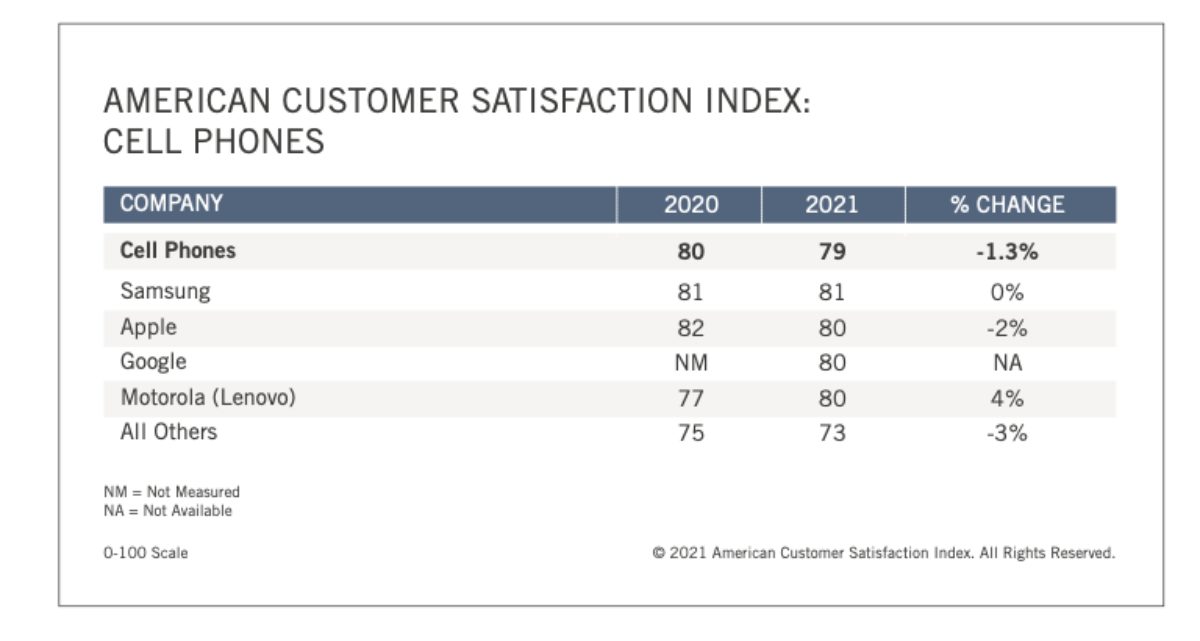 The onset of COVID-19 placed high demands on the wireless phone service industry as cell phones and wireless networks became the lifeline for people to stay connected to loved ones and the workplace.

According to the American Customer Satisfaction Index (ACSI) Wireless Phone Service and Cell Phone Study 2020-2021, Samsung, unchanged at an ACSI score of 81 (out of 100), claims first place among cell phone manufacturers. Last year’s leader Apple falls 2% to 80, landing in a three-way tie for second with Lenovo’s Motorola (up 4%) and Google, which makes its industry debut. The group of smaller companies sit in last place, dropping 3% to 73.

Other data from the ACSI Wireless Phone Service and Cell Phone Study 2020-2021shows that  customer satisfaction with wireless service overall remains steady at a score of 74.

Mobile network operators (MNOs) are unchanged year over year with an ACSI score of 73, while full-service mobile virtual network operators (MVNOs) decline for a second year, falling 2.7% to 73. Satisfaction with value MVNOs continues to slide as well, down 2.6%, yet still outpaces the other wireless categories with an ACSI score of 75. After a slight jump last year, customer satisfaction with cell phones inches back 1.3% to a score of 79.

AT&T (up 1%) and Verizon Wireless (unchanged) share the top spot in the MNO category with ACSI scores of 74. After leading all MNOs last year, T-Mobile, which completed its merger with Sprint in 2020, tumbles into second place, down 5% to 72. According to ACSI data, mergers usually negatively impact customer satisfaction.

Given T-Mobile’s sudden fall from grace, it appears we’re now witnessing the implications of the carrier’s union with a former MNO bottom dweller, according to the ASCI. This leaves U.S. Cellular in last place, dropping 3% to a score of 69.

Despite slipping 1%, Verizon Wireless stays in first place among MNOs with a network quality score of 79. AT&T remains second, unchanged at 77, followed by T-Mobile, which sinks 4% to 74. U.S. Cellular finishes last, dropping 3% to a score of 72.

Two full-service MVNOs tie for second place at 75: Cricket Wireless (down 1%) and newcomer Spectrum Mobile. Metro by T-Mobile is next, unchanged at 74, followed by Boost Mobile, which slumps 4% to the bottom of the category with a score of 71.

As part of the ACSI survey, respondents are asked how much they spend each month for their wireless phone service. This information, combined with the customer satisfaction and customer loyalty data, indicates which customer segments would benefit most from an improved customer experience.

The American Customer Satisfaction Index (ACSI) measures and analyzes customer satisfaction with more than 400 companies in 46 industries and 10 economic sectors, including various services of federal and local government agencies. Reported on a scale of 0 to 100, scores are based on data from interviews with roughly 500,000 customers annually. For more info, go to www.theacsi.org.