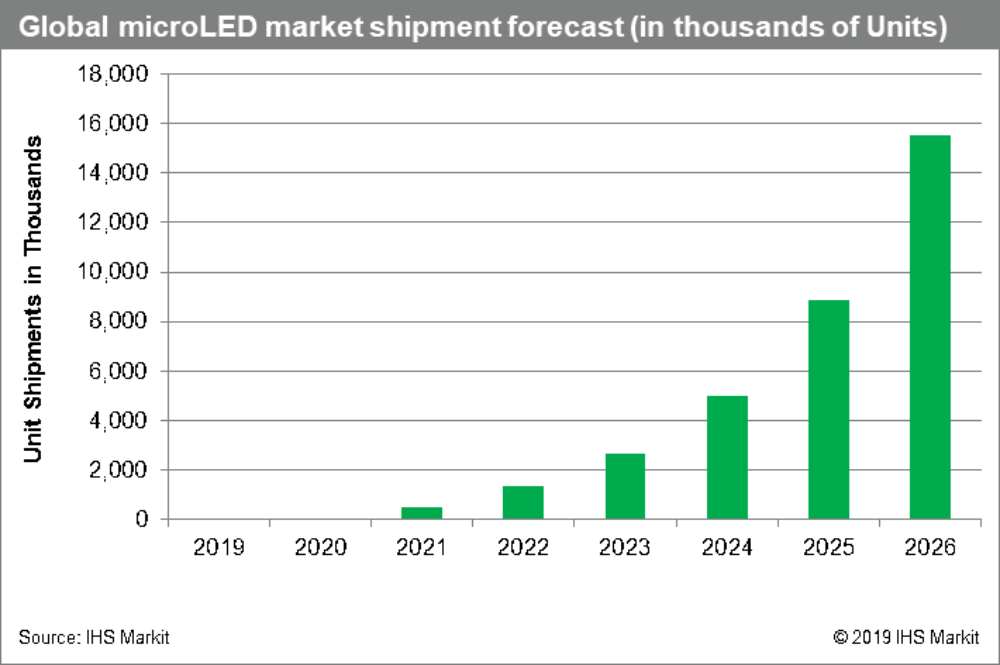 Rising from negligible levels this year, the global market for microLED displays is expected to grow to 15.5 million units in 2026 as steep declines in manufacturing costs make the emerging technology suitable for the mass market, according to the recently released IHS Markit Micro LED Display Technology & Market report.

MicroLED shipments in 2019 and 2020 are expected to total less than 1,000, according to business information provider IHS Markit. However, with manufacturing costs plunging during the coming years, microLED pricing will drop as well, allowing the technology to gradually find acceptance in applications including smart watches, televisions, augmented-reality systems and smartphones.

“Despite their extremely high price tag compared to conventional LCD and OLED panels, microLED displays offer advantages in brightness and energy efficiency that make them an attractive alternative for ultra-small and ultra-large applications,” said Jerry Kang, associate director at IHS Markit. “The manufacturing process for microLED will allow suppliers to reduce their production costs over time. Once the process matures, microLED sales will begin to rise.”

Like OLEDs, microLEDs are an emissive display technology, meaning they generate their own light and thus that don’t require a backlight. By eliminating the power-hungry backlight, they can achieve superior power efficiency compared to LCDs. Moreover, microLCDs are much brighter than OLEDs.

MicroLED displays are composed of arrays of microscopic LEDs, each of which represents an individual pixel. Manufacturing these displays involves picking up massive numbers of LED chips from epitaxial wafers and placing them on target substrates, a process known as mass transfer. Manufacturing is expected to reach the maturity threshold in 2024.

“Despite the growth in acceptance, microLED shipments in 2026 will still amount to just 0.4% of the global flat-panel display market,” Kang said. “However, with shipments of nearly 16 million units that year, microLED will have entered mass-market territory, setting the stage for much wider acceptance during the following years.”