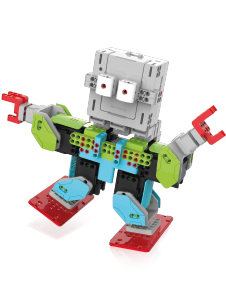 UBTECH Robotics’ (www.ubtrobot.com) MeeBot Kit and Animal Add-On Kit, are both available at Apple.com and at Apple stores in select countries. The interconnecting pieces can be built into any design imaginable and programmed to move in realistic life-like motions by people aged 8 to 88.

The JIMU Robot system is the first robotics line that allows the user to design, build and program their very own robot, as well as share and access an unlimited number of JIMU Robot designs and programming options through an online global robotics community accessed through the JIMU Robot app. JIMU Robot “inventors” can build the MeeBot Kit, any of UBTECH’s pre-designed models, or invent their own creations, by combining the interlocking, snap-together parts and components in the MeeBot Kit with the Animal Add-On Kit, both available at Apple.com and Apple stores.

JIMU Robot creations are programmed and controlled using the JIMU Robot app, available on the App Store.  The app also provides access to a global online community exclusively for JIMU Robot Inventors to post, share and like official and user generated JIMU Robotic designs. The app provides instructions and tutorials on how to build, program and control JIMU Robot creations, as well as meet friends and share ideas with the JIMU Community.

The JIMU Robot Animal Add-On Kit is a MeeBot accessory kit available exclusively at Apple Stores and provides an additional robotic servo motor and all of the parts and components needed to create four additional animal characters: Penguin, T-Rex, Seal and Parrot, or to build and animate any robotic creation the user can imagine.  Once a JIMU Robot character is built and programmed, users may capture its design and performance and share it with the JIMU Robot Community through the JIMU Robot app, where users can see and “like” other robotic creations from JIMU Robot enthusiasts around the world.