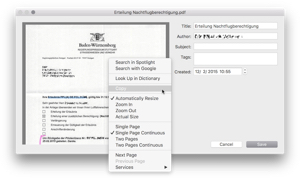 DEVONtechnologies has updated all editions of its intelligent information and document manager DEVONthink as well as the smart notebook DEVONnote.

The revised view/edit pane of DEVONthink and DEVONnote 2.8.11 shows icons for documents that cannot be displayed. Automatically opened panels such as the Activity or Log panels are no longer activated by default.

Adding metadata to PDFs created from scans using text recognition (OCR) becomes much easier with DEVONthink Pro Office 2.8.11. The rewritten entry panel can be resized and allows to browse all pages of the created PDF. Users can  select and copy text or use the contextual menu for more options. Also, email archiving with DEVONthink Pro Office fixes attachments on-the-fly. This improves viewing, indexing and converting of attachments. It no longer indexes corrupt messages, too.

All editions of DEVONthink as well as DEVONnote require an Intel-based Mac and OS X 10.8.5 or later (in the Mac App Store: OS X 10.9 or later). They can be downloaded from www.devontechnologies.com and be test-driven for free before they need to be properly licensed.