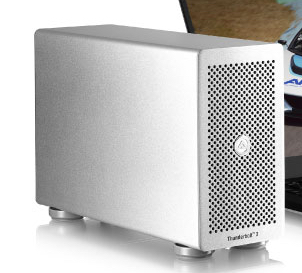 The second Thunderbolt 3 port operates the same as a Thunderbolt 3 computer port by supporting USB 3.1 (up to 10Gb/s), DisplayPort monitor or up to five daisy chained Thunderbolt 3 devices. It gives Sony Vegas, Adobe Premier, Photoshop and Lightroom, Corel VideoStudio, Pinnacle Studio and other users the ability to edit and playback multiple streams of HD and/or 4K content or manage thousands of RAW photographs, says Wright. Up to six Thunder3 PCIe SSDs can be daisy-chained together for increased storage capacity. The Akitio Thunder3 PCIe SSD will be available in the second quarter for $1,299.