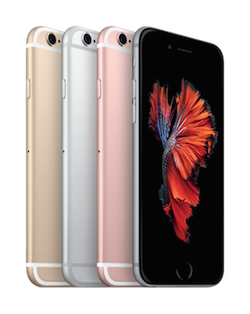 Today, Apple announced the iPhone® 6s and iPhone 6s Plus, both with the new 3D Touch interface which senses force enabling users to interact with content and access new features such as time saving shortcuts. The new phones are “made from the strongest glass on any smartphone and 7000 series aluminum, the same alloy used in the aerospace industry.” Both models have faster Wi-Fi and LTE Advanced, and also support up to 23 LTE bands — Apple says “the most in any smartphone — for better worldwide roaming.”

iPhone 6s and iPhone 6s Plus introduce Live Photos which bring still images to life by capturing a bit before and after the photo is taken. Apple makes it clear that these are not videos, but full resolution photos, and that they are stored in a storage efficient manner. See a demonstration at https://www.youtube.com/watch?v=Tyz90bvcSU0.

The new phones are powered by the A9 chip which Apple touts as “Apple’s third-generation 64-bit chip … with 70 percent faster CPU and 90 percent faster GPU performance than the A8.” The M9, Apple’s next-generation motion coprocessor, is embedded into A9, “allowing more features to run all the time at lower power.” Apple says that this allows users to access “Hey Siri” without iPhone needing to be plugged in.

3D Touch allows for new gestures, including the new “Peek and Pop” allowing you to “dip in and out of content without losing your place.” See a video showing these features at http://www.apple.com/iphone-6s/3d-touch/.

For photos and video, the new camera is 12-megapixel for stills, and takes 4K video with a resolution of 3840 x 2160 (over 8 million pixels). Apple has also expanded the optical image stabilization to video on iPhone 6s Plus, as well as enhanced the camera to take videos in lower light. Apple has updated the front facing camera as well, wtih a 5-megapixel FaceTime HD camera and new “Retina Flash.” Retina Flash is similar to a feature available on SnapChat where the entire screen momentarily gets bright to provide additional light for pictures of oneself.

Apple also introduced the iPhone Upgrade Program allowing users to upgrade their phone every year. Features include: Get a new, unlocked iPhone every year. You choose the carrier. Monthly payments, and iPhone protection with AppleCare+. AppleCare+ covers for up to two incidents of accidental damage, each subject to a service fee plus tax including screen damage, accidental drops, and liquid damage as well as two years of repair/replacement service covering your iPhone, battery, included EarPods and accessories, use of iOS, iCloud, and Apple-made apps, and connecting to Wi-Fi.