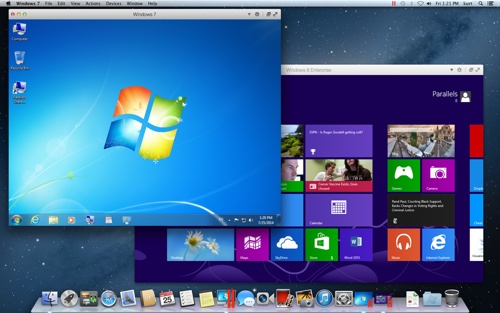 The updates offers new built-in “intelligence” and support for Apple’s latest operating systems – including the upcoming OS X Yosemite. Starting Aug. 20th, current users can upgrade to Parallels Desktop 10 for Mac at www.parallels.com/upgradepd10. For new customers, Parallels Desktop 10 will be available for purchase at retail and online stores worldwide and via the Parallels website starting Aug. 26th.

Parallels Desktop 10 will bring many of the announced features of Yosemite to Windows and Windows applications, supporting iCloud Drive, iMessages and SMS text sharing from Windows, and control of virtual machines from Spotlight preview and Finder QuickLook. Other improvements include Wizards that guide users through optimizing their experience, improved performance and battery life, and improved usability between operating systems. It also lets you use whatever operating system fits your needs – including OS X Yosemite, OS X Mavericks, Mac OS X Mountain Lion, Windows 8, Windows 7, Chrome OS, Android and a number of Linux operating systems – all on one computer.

“Today we are seeing a shift in consumer behavior. Users’ expectations are that they should be able to simply run any application they need regardless of operating system,” says Laura DiDio, ITIC Consulting. “Parallels Desktop 10 for Mac is helping customers realize this goal by offering best-in-class virtualization software and cross-platform access tools for consumer, SMB and enterprise users.”

Parallels is also updating Parallels Desktop for Mac Enterprise Edition, which lets users provide Windows applications on Macs in a corporate environment. Now IT managers can support Windows applications for Mac users with a configurable, policy-compliant solution that easily fits into existing IT business processes.

New features allow administrators to select and enforce a USB device policy, install OS X guests using a NetBoot image from a server on the corporate network, encrypt OS X virtual machines with the help of the FileVault encryption feature built into OS X, and check the status of licenses and reclaim seats directly. Built upon the world’s best-selling Mac desktop virtualization solution, it adds centralized administration and management capabilities as well as enhanced security to keep IT in control of virtual machines.

According to the folks at Parallels, Parallels Desktop 10 for Mac offers the following improvements:

Users can now open Windows documents up to 48% faster.
Battery life is extended by up to 30%, giving people additional work time when they need it most.
Virtual machines use up to 10% less Mac memory.
New virtual machines with default settings launch Office 2013 applications up to 50% faster.
Virtual machine only takes as much disk space on the Mac hard drive as it needs. Real-time optimization automatically compacts virtual disk, eliminating the need for periodic manual compacts.
Free Disk Space Wizard allows to review and clean up space used by Parallels Desktop and Virtual Machines.
Now with one click users can select from a number of choices to optimize their virtual machine based on what their primary usage is: productivity, games, design or development.
The new Parallels Control Center is a one-stop-shop for managing Parallels Desktop; it allows users to manage all their virtual machines and configuration settings from a single place.
Windows installation has been streamlined, with new ways to configure virtual machines.
Regional settings from the Mac are now set by default in Windows virtual machines.
Users can share files, text or web pages from Windows using Internet accounts configured on their Mac such as Twitter, Facebook, Vimeo, Flickr; or send them via email, AirDrop and Messages.
When users install a new Windows application, its icon will automatically be added to the OS X Launchpad.
The unread email indicator on Outlook lets users see at a glance the number of unread emails in Outlook, just like with Apple Mail.
Users can drag and drop files to the virtual machine icon in the Dock to open in Windows.
Users also have the ability to easily restore any setting to its default value by clicking the Restore Defaults button in the Virtual Machine Configuration window.
Users can drag and drop files to Mac OS X virtual machines.