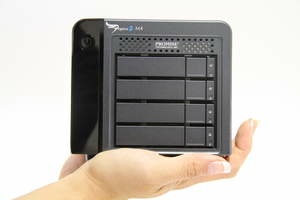 At the Worship Facilities Conference & Expo (WFX), Promise Technology (www.promise.com) announced the availability of two new storage solutions for the growing number of houses of worship that are increasingly recording and editing live video streams to more widely broadcast worship services, sermons, and music — often with multi-camera recordings being delivered live to several locations and branches, or streamed online.

At WFX, the new Pegasus2 M4 SSD will be featured in demos for multi-camera environments and for high-performance live content delivery. Promise will demo the VTrak A3800 storage appliance with the new SANLink2 10G SFP+ and the VTrak G1100 NAS Gateway.

The SANLink2 10GBaseT, launched in April at NAB, is a Thunderbolt 2 to 10GbE copper bridge adapter, which, combined with a Mac Pro and RAID storage (such as the Pegasus2), expedites content delivery and rendering to offload footage captured from a Phantom CineStation. Similarly, the new SANLink2 10G SFP+ is a Thunderbolt 2 to 10GbE optical bridge adapter.