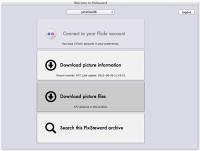 Pubblog has released PixSteward (http://pixsteward.com) 1.0.7, an update of the Flickr backup and database for the Mac. It’s a maintenance upgrade.

PixSteward lets users download their Flickr photostreams to their Mac, along with any titles, tags, descriptions, geographic info and EXIF data they’ve entered online. With the software’s relational database, users can find, sort, and export single images or multi-picture sets from their Flickr archive even when they aren’t connected to the Internet.

According to the folks at Pubblog, PixSteward is especially helpful for Flickr Pro users or those who need to manage multiple Flickr accounts. With Flickr Pro accounts, PixSteward downloads and stores the original images from Flickr — JPEGs, GIFs and PNGs — so artwork containing transparency or vector paths (Photoshop JPEG) is preserved. It requires Mac OS X 10.6 or higher and costs US$24.95. There’s a $9.99 “lite” version available at the Mac App Store.

Hear the time, with SpeakTime