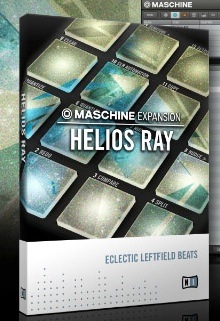 Containing three separate styles of drum kits as well as unique Melodic Kits and new Massive presets, Helios Ray is out now for Maschine and Maschine Mikro, with a compact version for iMaschine also now available as an in-app purchase via the Apple App Store.

The Digital Kits feature Brazilian and Latin percussion such as shakers, bongos and congas, and smooth, warm basses. They’re designed for producers working in a nu jazz and broken beat style.

The Analog Kits contain gritty drums and percussion provided by classic hardware units. All included drum kits also feature pre-programmed patterns for each kit, providing producers with an inspiring platform from which to improvise.

Helios Ray is available at the NI Online Shop for US$49. A compact version of Helios Ray is also available for iMaschine, the $0.99 groove sketchpad for the iPhone and iPod touch. For more info go to www.native-instruments.com/heliosray .

Dracosoft is back in business!