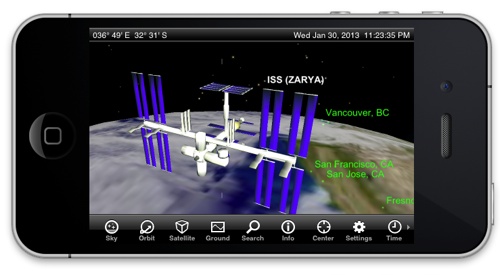 Southern Stars (www.southernstars.com) has released a new iOS app called Satellite Safari. It’s available at the Apple App Store (http://tinyurl.com/cjhj9k7) for US$2.99 (40% off the regular price) until April.

Satellite Safari is Southern Stars’ “tour guide” to the universe of satellites that have been launched around Earth. Later this year, it can become your personal gateway to a real satellite in orbit that you can take pictures and send broadcasts from.
Satellite Safari is the official app of the SkyCube mission (www.skycube.com).

The SkyCube satellite is scheduled to launch and deploy from the International Space Station in September, 2013. When it does, you’ll be able to request your own images of the Earth, and broadcast your own radio messages from orbit as “tweets from space,” using this Satellite Safari app on your iPhone or iPad.

Until then, you can use Satellite Safari to learn more about the International Space Station and hundreds of other satellites already in orbit. Satellite Safari will tell you where to find them in the sky, when they’ll pass overhead, and where they’re orbiting over Earth right now.

The app can show you the spacecraft that will pass over your location at any given time. You can even get a “bird’s eye view” from a satellite itself, and see the Earth from orbit exactly as the satellite sees it, according to Tim DeBenedictis of Southern Stars.

Satellite Safari updates its satellite orbit data from celestrak.com automatically every day. All satellites include facts and figures computed for your precise GPS location, and updated every second. Many satellites also include descriptions that give you the mission’s history, purpose, and more.