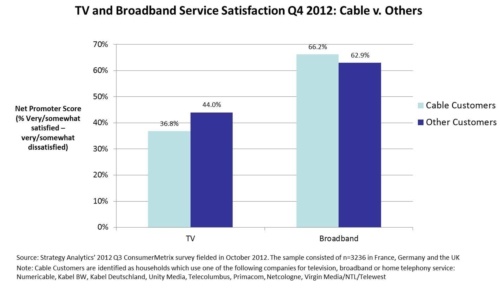 Europe’s leading cable companies score higher than their rivals in customer satisfaction with broadband service, but trail them in television service, according to the latest research from Strategy Analytics’ ConsumerMetrix service (www.strategyanalytics.com).

The report, “European Cable: Customer Satisfaction and Profiles,” found that customers of cable companies give them a net promoter satisfaction rating of 66% for their broadband service but only 37% for their television service. In spite of this, satisfaction with both television and broadband cable services improved during 2012, and improved significantly since 2010.

“The European cable industry, like its US counterpart, faces the challenge of striking the right strategic balance between its highly profitable broadband services and its more marginal television activities,” notes David Mercer, vice president, Digital Consumer Practice. “With poor customer satisfaction ratings on television,  the industry will be under pressure to compete more effectively in this market in order to win and retain multi-play customers.”

Strategy Analytics conducted an online survey, the ConsumerMetrix Survey fielded in October 2012. The sample consisted of n=3236 in France, Germany and the UK ages 15-74. Strategy Analytics weighted the data by country, age, gender and internet use to represent the US and European populations of internet users, respectively. Cable households were identified as customers of the leading cable companies in these markets.

HoudahGeo for the Mac gets Lightroom 5 support