A slew of new devices leveraging improved connectivity to mobile handsets have fueled strong growth for wearable wireless mHealth devices in 2012, according to ABI Research (www.abirsearch.com). By the end of the year, nearly 30 million devices will have shipped, up 37% on 2011 shipments, says the research group.

The inclusion of Bluetooth Smart Ready connectivity in many smartphones including Apple’s iPhone and Samsung’s Galaxy III, is driving a new wave of interest and investment in the capabilities of wearable sensoring devices. Between 2011 and 2017 the market for these devices will grow at a CAGR [compound annual growth rate] of nearly 40%.

Existing wearable wireless sports and wireless vendors, such as Polar, Garmin, Nike, Adidas, and others have all expanded their wearable wireless sensor offerings during 2012 while a host of start-ups have come to market with offerings extending the use and potential of collected data and how it can be used.

“The ability to communicate with ultra-low power from a wearable device to smartphones and on to Internet applications using the phone as a gateway is driving a wave on innovation and investment,” says ABI Research principal analyst, Jonathan Collins. Already under way and increasingly so over the next five years, devices will move from the traditional heart rate monitoring unit to embrace multiple device designs to measure range body parameters that will inform individuals, service providers and more.” 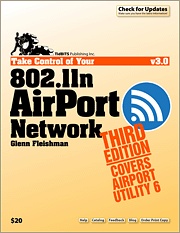 ebook lets you ‘Take Control of Your 802.11n AirPort Network’