Apple patent is for dock with movable connector for display devices

An Apple patent (number 20120264329) for a dock with a movable connector for a display device has popped up at the U.S. Patent & Trademark Office.

Here’s Apple’s background on the invention: “Portable electronic devices (such as phones, media players, notebook/netbook computers, tablet computers) are becoming ubiquitous in today’s society. Portable electronic devices commonly have display screens (e.g. a touch screen) on which users view and/or select data and functionality. For example, a user may select a video or other presentation to watch. In such circumstances, it is more convenient for the user to have the device in an upright (viewable) position by placing the device in some sort of holder so the user is not forced to hold the device during viewing.

“Additionally, users would like to interface the display devices with other electronics. For example, a user may want to play music through speakers, or simply charge the device. However, during such interfacing or charging, the user would still like to be able to view the display and/or controls of the device.

“To provide such features, manufacturers provide docking stations (docks) in which a user can plug the device. Often the docks will have a connector rising out from a surface, with the connector being in a position such that the device can be viewed and/or used. However, connectors can be weak points, especially when devices become large and additional stresses are placed on the connector. The connector may also provide most of the support of the device. Accordingly, the connectors of such docking stations can be damaged by misuse, e.g. being pulled in improper direction.”

The inventors are Jeff Hayashida, Cameron Frazier and Emery Sanford. 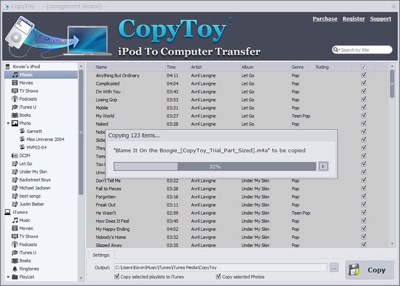 CopyToy lets you transfer data from iOS device to a computer