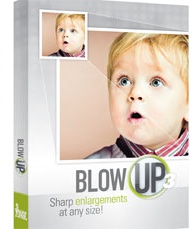 It’s hard to avoid artifacts and blur when you need to print an image larger than its current resolution allows. There are several solutions for enlarging an image, and given how far these technologies have come, it’s more about selecting the most appropriate solution for your specific situation. Alien Skin (http://www.alienskin.com) has a strong update to their US$199 Blow Up plug-in for Photoshop and Lightroom that you may wish to size up for yourself.

Blow Up 3 separates itself from its competitors with Smart Crop. This is a favorite feature providing the option to resize and crop your image in a way that targets the subject matter based on the content. This feature is easy to toggle in the preference settings. Image size is increased by first converting the pixels into vector data, up scaling the data, and then converting it back to the now-larger pixel map. This method maintains clarity far better than bicubic enlarging.

Batch processing is just a matter of setting up a batch action, as you would for any action. Blow Up 3 doesn’t create a new layer in Photoshop in use with an action, so according to Alien Skin, duplicating the layer first is a necessity. In single image use, a checkbox provides the option for the output to appear in a new layer.

Unfortunately, Blow Up 3 doesn’t create output tiling unless your original images are already in seamless tile format. Alien Skin recommends keeping the magnification to 400% or less for best results, and print tests confirm their estimate as being accurate.

Blow Up 3 is fast from start to finish with quick previews and rendering. Enlarging an image is simple via the somewhat plain interface, but the real test is the quality of the results, and Blow Up 3 gets big applause.