Samsung says it will fight Apple’s move to stop U.S. sales of its new Galaxy phone, reports “Reuters” (http://macte.ch/0fr1g). The company says will vigorously oppose Apple’s request for a court to ban sales of the Galaxy S III smartphone and still plans to go ahead with the device’s scheduled release in the U.S. on June 21.

The South Korean company said in a statement that it will “demonstrate to the court that the Galaxy S III is innovative and distinctive.” On Monday Judge Lucy Koh of the United States District for the Northern District of California denied, for the time being, Apple’s post-appeal push for an injunction against the Samsung Galaxy Tab 10.1 over an iPad-related design patent., reports “FOSS Patents” (http://macte.ch/Wv7LI).

“This is unrelated to the merits of the motion. Apple is invited, and definitely won’t decline the invitation, to renew its motion after the United States Court of Appeals for the Federal Circuit (CAFC), which published its opinion on Apple’s appeal in mid-May, has issued a formal mandate to the district court,” Florian Mueller writes for the web site. 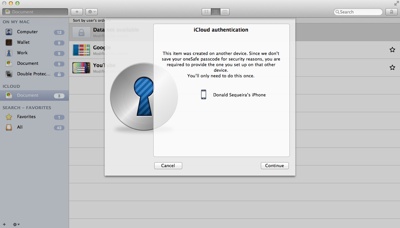 oneSafe, the password manager app, is now on the Mac