Apple has been granted several patents by the U.S. Patent & Trademark Office. Among them are the following:

Patent number 8131645 is for a system and method for processing media gifts — as in Apple’s various app stores. Various techniques are provided for the gifting between multiple electronic devices of media content provided by an online digital media provider. An offer and acceptance of a selected gift file is accomplished between a gifter device and a receiving giftee device using a near-field communication (NFC) connection.

The giftee device may authenticate the license and unlock the gift file once a connection to the online provider is available. The inventors are Gloria Lin, Amir Mahmood Mikhak, Taido Lantz Nakajima, Sean Anthony Mayo, Michael Rosenblatt and Andrew Hodge.

Patent number 8131674 is for methods and systems for managing data, such as metadata or index databases. In one exemplary method, a notification that an existing file has been modified or that a new file has been created is received by an indexing software component, which then, in response to the notification performs an indexing operation, where the notification is either not based solely on time or user input or the notification includes an identifier that identifies the file. Other methods in data processing systems and machine readable media are also described. The inventors are Yan Arrouye, Dominic Giampaolo, Andrew Carol and Steve Zellers.

Patent number 8130226 involves a framework for graphics animation and compositing operations. A framework for performing graphics animation and compositing operations has a layer tree for interfacing with the application and a render tree for interfacing with a render engine. Layers in the layer tree can be content, windows, views, video, images, text, media, or any other type of object for a user interface of an application.

The application commits change to the state of the layers of the layer tree. The application does not need to include explicit code for animating the changes to the layers. Instead, an animation is determined for animating the change in state. In determining the animation, the framework can define a set of predetermined animations based on motion, visibility, and transition. The determined animation is explicitly applied to the affected layers in the render tree.

A render engine renders from the render tree into a frame buffer for display on the processing device. Those portions of the render tree that have changed relative to prior versions can be tracked to improve resource management. The inventors are Ralph Brunner, John Harper and Peter N. Graffagnino.

In an embodiment, an operand queue may store operand data for use by the commands. The inventors are Douglas C. Lee, Diarmuid P. Ross and Tahoma M. Toelkes. 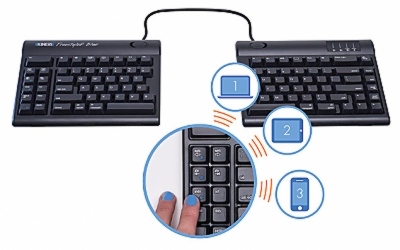 ‘MacVoices’ looks at the iPad 2