Inflection has announced Numbers+ for the iPhone, iPad, and iPod touch. Built to streamline and simplify sharing contact information with others, the free app utilizes a continuously growing online database to circumvent the typically tedious process of adding new contacts. Users simply write in their new contact’s name or number and the app does the rest.

Smappsoft has released Look Again! Lite 1.0, a free version of their brain builder for the iPhone and iPod touch platform. It challenges your brain to quickly recognize patterns and shapes while playing a puzzle game.

The Top Apps! has introduced Photo Booth for Free for the iPhone and iPad. The free app lets you “turn your existing photos into classic photo booth strips or strike a pose on-the-go.” You can then give your photo strip a twist with over 100+-plus props and photo effects.

GlasseyStrategy has launched StratPad Plus for iPad. The US$9.99 app is designed to help business owners develop their business strategy and create a summary business plan using a step-by-step template. Users can share their strategy with nine reports including a summary business plan. Other reports include a Project Plan, a Gantt chart, and a detailed Agenda. Reports are prepared instantly and can be viewed on screen, printed wirelessly or emailed as high-resolution PDFs.

Mezmo Media has debuted Tongue Flied for the iPhone and iPad. In the $0.99 arcade game, players move their frog around ponds and swamps in search of their favorite food — insects. With the bugs buzzing high above, players need to aim and shoot out their frog’s extra-long tongue if they want to eat.

Edenpod has presented BetterLetter for iOS. In the free word title app, you’re challenged to form a word by building from a single letter turn by turn. You can either play against EdenBOT n offline mode or against your friends or the world in online mode using OpenFeint.

Mark On The Iron is offering Aetherium I — The Escape for iOS devices. In the $0.99 app, you run for your life and collect stars until you’ve got enough energy to strike back. Survive for as long as you can and take down as many aliens as possible while trying to control up to three objects at once. Aetherium I – The Escape features three modes of play with three mini games, as well as Game Center support with 19 achievements.

MobileChamps has developed Christmas Camera+ 1.0 for iOS, their photo and video app that offers 20 different Christmas themed, decorative frames for photos shot on any camera-equipped iOS mobile device. Photographers can see the subject inside the frame as they shoot.

SSA Mobile has given us My Secret Browser 1.0, a private browser utility for iPhone, iPad and iPod touch. The $0.99 allows you to hide your private sites, browsing history, Google searches, passwords and downloads from prying eyes.

OneHaze has unleashed Ninja Bugs for iOS devices. Through four different modes of gameplay in the $0.99, players will unlock and can use different backgrounds and weapons. Ninja Bugs also incorporates Open Feint, giving players the opportunity to compete for position on the leader board and unlock achievements. Users on the iPad can also play a multiplayer, head-to-head version.

Blue Orange Games and HagerApps have teamed up for Yamslam 1.0, their version of the board game played with five dice. The goal of the game is to throw a high scoring combination and claim a corresponding scoring chip. Players get three rolls of the dice, and may keep good numbers and roll the remaining dice on their following rolls. There are only four of each of the seven scoring chips, and rolling a high-scoring combination helps to win only if a matching chip remains. Yamslam 1.0 can be downloaded for free and played with friends using Apple’s Game Center. The ads can be removed from all the player’s devices for $3.99. The additional features of solitaire play and face-to-face play by passing the device can also be added for $3.99. A bundle is available for a $5.99.

SpartanApps has rolled out Wheel of Choice for iPad, iPhone, and iPod touch devices running on iOS 4.0 or later. The free app is designed to make daily decision fun by simply asking a question and spinning the wheel. You can enter as many custom questions as you like and fill those questions with the answers that suit you.

Boinx Software has served up iStopMotion for iPad. The $4.99 app sports camera overlay for visually orchestrating one frame to the next, instant playback, a timeline, and export options for sharing movies.

CrossWire is a new, free trivia game for the iPhone and iPad that challenges you to match up related facts and score as many points as possible. To play, simply touch an answer on one side, then touch the matching answer on the other side. If it’s correct, a green line will connect the answers. Score enough points in the first two rounds and you’ll make it to the third and final “HotWire” round.

Light Sleepers Studios has announced Koto Go Silence for the iPhone, iPad, and iPod touch. Boasting an story geared towards young readers, it’s a $2.99, animated storybook app that throws users into the adventurous world of a young samurai dog named Koto. The story follows Koto and the mysterious chases he embarks on while trying to maintain peace and quiet.

Appnori and Gamevil have teamed up for Toy Shot for the iPhone and iPod touch. Featuring visuals reminiscent of beloved childhood toys, the $0.99 game features over 100 distinct levels of physics-based puzzles.

Daze End Software has released Benjamin 1.0, a $9.99 task manager for iOS devices. Based on the FranklinCovey method of time management, Benjamin is built specifically to allow FranklinCovey adherents to replace their Franklin Planner with an iPhone. It also includes many features that are specific to the FranklinCovey system. Benjamin stores its user’s master task list, daily task lists, projects, and daily notes for mobile access without the need to carry a heavy binder.

Nosy Crow’s Bizzy Bear on the Farm app for iPad, iPhone and iPod touch is now available on the Apple App Store. This $3.99 picture book app, recommended for children ages 2 to 4, is the first in a series of apps based on Nosy Crow’s Bizzy Bear board book series illustrated by Benji Davies. Children follow Bizzy Bear on his day at the farm and play inside the story. Using the touchscreen, they help pick apples, collect eggs, drive the tractor, and more.

PDL Productions has introduced iRound Up 1.0, a $0.99 gaming title for iOS devices. In the app, you choose to be a cowboy or cowgirl and wrangle in the bulls, or a farm dog and herd in the sheep, or even a sheriff and capture the runaway bandits. Three different arenas provide a total of 45 levels with over 460 targets to capture. 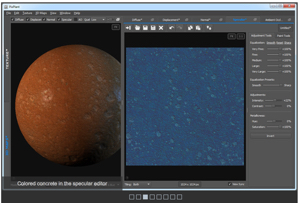