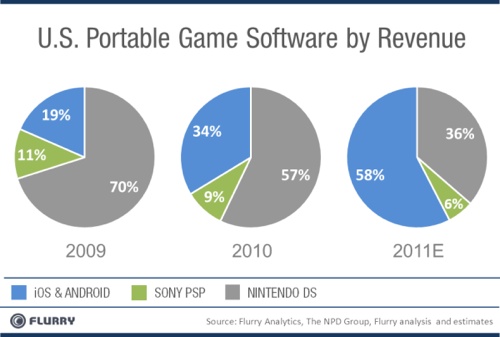 Portable gaming, played primarily on Nintendo DS and Sony PSP devices, has been dominated by these two companies for over two decades. However, that’s changing fast.

In this model, at retail, consumers pay around US$200 for the gaming device and up to $40 for popular game cartridges. Because of the similar form factor, overlap in consumer base (especially younger players on iPod touch) and the casual nature of game content, Flurry combines iOS and Android devices with traditional portable devices to form the category. With the inclusion of smartphone game revenue into the category, shifts taking place in market share become clearer.

“The most striking trend is that iOS and Android games have tripled their market share from roughly 20% in 2009 to nearly 60% in just two years,” notes Flurry. “Simultaneously, Nintendo, the once dominant player, has been crushed down to owning about one-third of market in 2011, from having controlled more than two-thirds in 2009.  Combined, iOS and Android game revenue delivered $500 million, $800 million and $1.9 billion over 2009, 2010 and 2011, respectively.”

As reported by Flurry earlier this year, the “freemium” game model is revolutionizing and expanding revenue on mobile devices. Just as smartphone game revenue has climbed aggressively, Nintendo DS and Sony PSP revenue has dropped precipitously.  Over the last three years, Nintendo and Sony posted a combined $2.2 billion, $1.6 billion and $1.4 billion for 2009, 2010 and 2011, respectively.

Within the portable category, an abundance of digitally distributed free and $0.99 games, available on hardware, that is both comparably priced and more powerful than traditional portable game devices, better appeals to many consumers, says Flurry. As a result, the days of paying $25, or more, for a cartridge at a retail store may soon end.

What’s more, the installed base of iOS and Android devices has not only reached critical mass, but also continues to grow at unprecedented rates, notes Flurry. In their latest public statements regarding installed base, Apple and Google reported a total of 250 million iOS devices and 190 million Android devices activated, respectively.

Due in part to its demise in the portable game category, Nintendo is facing its first fiscal year loss since the company began reporting profits in 1981. Combined with slumping Wii sales, Nintendo is struggling, even with its powerful stable of original IP led by Mario Brothers, and despite the fact that the exchange rate between the Japanese Yen and U.S. dollar is currently in its favor.

Equally concerning for Nintendo is that the battle for video game dominance is entering the living room, with entries by both Apple and Google into the TV category. Ostensibly, this new class of hardware will create a new platform upon which the digital distribution model of apps will be overlaid.

Now, in addition to tablet form-factor competition, the console game industry, which currently pits Microsoft, Sony and Nintendo against each other, will additionally face competition from Apple and Google TV initiatives. Beyond 2011, if Nintendo continues to face financial hardship, it may be forced to consider difficult choices such as divesting its hardware business and distributing its content, for the first time, across non-proprietary platforms.

“In our last review of the portable game category, comparing 2009 to 2010 revenue, we believed Mario was already ‘standing on a burning platform’,” says Flurry. “With 2011 numbers now added to the story, it appears that the inferno has intensified, and that Nintendo may truly face a Nokia-like decision to jump or perish in the flames of its own burning platform.” 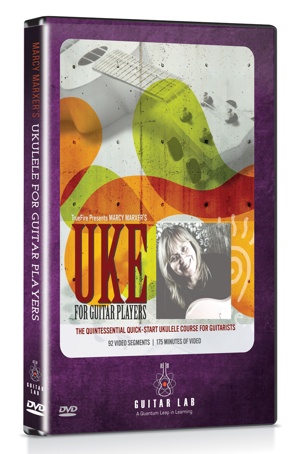