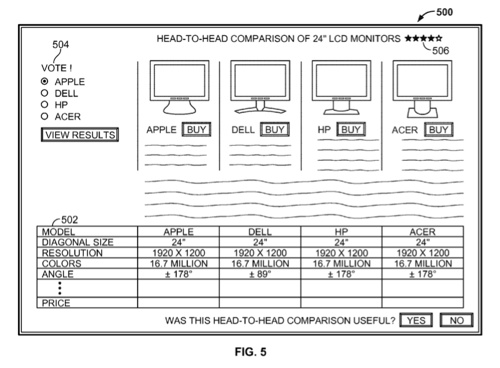 Patent number 20110238699 at the US Patent & Trademark Office shows that Apple is working on head-to-head comparison features for its online stores.

Here’s Apple’s background and summary of the invention: “In the context of online stores, a user or potential customer of the store typically has for a particular type or class of item multiple different models from which to select. Different models may differ, for example, by available features, prices, manufacturers, etc. In some cases, administrators of an online store may provide comparisons of features and/or prices for different models of the same type of item to aid a user in the selection of a particular item.

“Such administrator supplied comparisons, however, typically do not include reviews on individual items and/or user feedback on items. A user of an online store may have access to reviews and/or feedback posted by others on individual items, but the user typically would have to expend time reading and sifting through the reviews for each individual item from a set of similar items under consideration to gain a sense of the pros and cons of each item. A single review and/or comparison of different models of the same type of item may exist from third parties (e.g., other web sites, magazine articles, etc.).

“The invention can be implemented in numerous ways, including as a process, an apparatus, a system, a composition of matter, a computer readable medium such as a computer readable storage medium or a computer network wherein program instructions are sent over optical or communication links. In this specification, these implementations, or any other form that the invention may take, may be referred to as techniques.

“Allowing members of a relevant community, e.g., an online community (such as users of an online store), to create or define head-to-head comparisons that can be provided to other members of the community, e.g., other users or customers of the store in the case of an online store, when appropriate is disclosed. In many cases, the user community may represent a wealth of information about a set of similar items or products available, for example, from an online store (or other third party), and it would be useful to be able to provide a comparison of the set of similar items to other users.

“In some embodiments, when an author selects items to be included in a head-to-head comparison, a comparison grid including various features of the items selected is automatically generated and/or populated from product descriptions and/or specifications available at an online store so that the author does not have to supply such information when defining a head-to-head comparison. In some such cases, the author may have the ability to append to, delete from, modify, etc., information included in the automatically generated comparison grid.

Also at the US Patent & Trademark Office is a new patent (number 20110238713) for per thread garbage collection. Objects associated only with a thread that created them are tracked. At a garbage collection time for a particular thread, it is determined which objects associated only with that thread remain reachable from a restricted root set associated with the thread. Any thread-only objects that are not determined to be reachable are garbage collected. The inventors are Gerald Blaine Garst Jr., Gregory Robert Parker, Douglas Joshua Behnke and Patrick C. Beard. 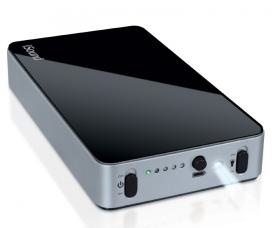