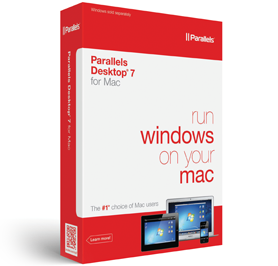 Parallels announced this morning that Parallels Desktop 7 for Mac will be available in stores on September 6th. Previous version owners are able to upgrade starting today. “More than 90 new and enhanced features in Parallels Desktop 7 include Mac OS® X Lion integration, performance boosts and a powerful new Parallels Mobile app and My Parallels services platform for iPad, iPhone and iPod touch devices.”

“As Macs have become more popular than ever, a growing number of Mac users, including enterprises, find they need to run critical Windows programs on their Macs. Parallels Desktop 7 for Mac lets you run popular apps like Windows Internet Explorer, Access, OneNote, Quicken and more, even the most demanding graphical programs, without rebooting and without compromise on speed and usability. Run Windows applications like they were made for your Mac,” said Parallels CEO Birger Steen. “The people have spoken and Parallels listened to make the best even better. Whether you’re a business, individual or student, Parallels Desktop 7 gives you the best Windows on Mac performance plus mobility from any iPad, iPhone or iPod touch.”

According to Parallels, highlights include:

Parallels Desktop 7 for Mac Enterprise Edition (http://www.parallels.com/desktop/enterprise) empowers businesses and IT departments to support Windows based business applications for Mac users with a configurable, policy-compliant solution that easily fits into existing business processes and helps reduce the cost of deploying and maintaining client-based software.