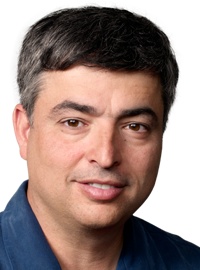 In his new role, Cue will oversee Apple’s iTunes Store, as well as the iCloud, iAd, and its iBookstore platform. Cue will report to the company’s new CEO, Tim Cook.

Here’s Cue’s biography at the Apple site: “Eddy oversees Apple’s industry-leading content stores including the iTunes Store, the revolutionary App Store and the iBookstore, as well as iAd and Apple’s innovative iCloud services.

”He is a 22-year Apple veteran and leads a large organization of amazing people. Eddy played a major role in creating the Apple online store in 1998, the iTunes Music Store in 2003 and the App Store in 2008. He also played a key role in developing Apple’s award-winning iLife suite of applications. In his early years at Apple, he was a successful manager of software engineering and customer support teams.

”Eddy earned a bachelor’s degree in Computer Science and Economics from Duke University.”