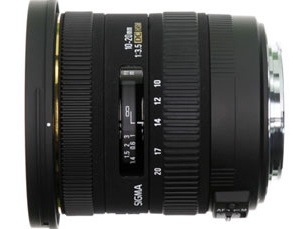 Car shows are notoriously terrible places to take decent photos. They’re almost always held during the middle of the day when the light is harsh, but the worst part is it’s nearly impossible to position yourself to take a decent shot.

With most lenses, you need to put considerable distance between you and the car, and show attendees constantly get in the frame. So a large car show seemed like the perfect place to test Sigma’s (http://www.sigmaphoto.com) new, US$950, 10–20mm f/3.5 EX DC HSM wide-angle zoom lens.

A wide-angle zoom is definitely the way to go when photographing in this type of situation, whether it’s a car show, antique show, or anywhere that’s crowded or the subject is large, such as architecture. I was able to get close enough to the cars where nobody would walk in front of me, and still get the entire car in the shot. No small feat for a show of this size. The photos were sharp with great color and no chromatic aberration. The lens is well made, the controls are nicely weighted, and the size is right. The HSM (hyper-sonic motor) is smooth and quiet, and focus is quick and accurate.

Are there drawbacks? As you might expect from a wide-angle zoom, there’s some barrel distortion, mostly between 10 and 12mm, it begins to go away at 14mm, and in the 17–20mm range it’s gone. Lens vignetting follows a similar pattern, with 10mm displaying the most vignetting regardless of aperture.

The price on Sigma’s site might seem steep, but this lens costs about $650 at major online retailers. Similar lenses from Canon and Nikon cost about $770 and $800, respectively, from these same retailers. The price difference alone makes the Sigma well worth consideration.

Flock rolls out social web browser based on Chromium platform