It seems there isn’t a day that goes by without another data security risk coming to light. As I have mused in this space, the cloud is not secure. I have Dropbox on my iPhone and iPad but haven’t used it much. Those who have posted their data to their Dropbox account ought to reconsider using that site for anything remotely private. Your data is not secure or even encrypted.

If what you want to store on your cloud data storage file is already held elsewhere on the Dropbox servers, they don’t even bother to upload your data file; they just make note that you have access to their copy of that file. That saves them space on their servers and saves money as well.

Imaging you have purchased a movie using the digital download method of marketing video. That movie is not duplicated in the files of all the subscribers on-line. All that exists in your cloud file is a note that you have access to that movie any time you want to see it. The notion that your data is your data and that storing in on the cloud is anything like storing that same data on local memory that you control is only in your head.

It seems Dropbox lied about encrypting data you store on your Dropbox cloud file.  They lied about who has access to that data and they hold the keys to access your data in a non-encrupted form. A complaint to the FTC alleges fraud in the terms Dropbox posted to its web site. Your supposedly secure data is subject to access by Dropbox employees, a subpoena from the police or even accessible to someone suing you. The copy of your data they would get is unencrypted.

The complaint alleges that Dropbox saves money by lying about the level of security they promise and terms they post on their web site and user agreements.  In short, Dropbox is not what they claim to be. Dropbox is not secure and never has been according to the FTC complaint.  See the article posted at: http://www.wired.com/threatlevel/2011/05/dropbox-ftc/ .

All the recent data scandals re-enforce my basic statement that trusting the cloud with your data is not a good idea. Data losses have occurred in all the common data Dropbox sort of services. The loss can be temporary or permanent, depending on the problem the cloud service encounters. Security breeches and hacking are also a potential problem. If you want guaranteed access to your files when you want them, beware of the cloud.

Accessing data via the Internet is intriguing, but a flawed concept due to all the aforementioned reasons. Microsoft and Google would rather rent you access to applications rather than sell the applications outright. With that sort of marketing plan, a small amount charged each time you use an application rather than a larger one time price allows a long term income stream where you may well end up paying them more.

The big push to have apps and data stored on the cloud flies in the face of declining memory prices for both hard drive and flash memory formats. The counter-intuitive notion of the cloud is very problematic to me. I personally, intend to pay a few bucks extra to buy enough actual memory on my devices rather than trust company, even Apple, with my data.

There are some uses for cloud storage of files more related to posting things for public display than personal storage of applications and or data. I recently put a trailer of the Passion Play of our church on my MoblieMe account as an MPEG file and linked it to the church web site. I did that to save bandwidth for the church. It worked like a charm.

Post my personal data on line? Not a chance, due to all the problems cited above. I fully expect Apple to launch a cloud service any day now and make a serious effort to sell us. I remain to be convinced the cloud is that great an idea for most of my data. I am deleting the Dropbox apps on all my devices.

That Greg’s Bite out of the cloud. 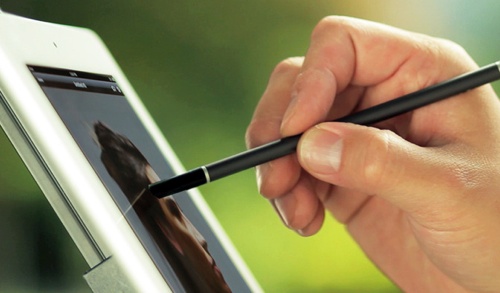 Nomad Brush puts a face to the Siri name