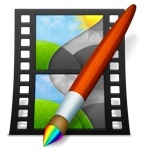 Norrkross Software (http://www.norrkross.com) has announced VideoCanvas 2.1, an update to their video editing, compositing and effects application for Mac OS X (10.6 or higher). It’s available at the Mac App Store in the Video category for US$9.99.

Formerly known as Norrkross Movie, VideoCanvas is a real time HD video editor that lets you edit video in multiple layered tracks, add your on titles, transitions and filters, including green screening. Version 2.1 adds support for the Mac App Store and more.

You can export to popular formats such as MPEG 4 and QuickTime. Where Apple’s iMovie offers professionally designed themes and templates, VideoCanvas instead offers lower level tools to allow the user to make the creative design decisions themselves and to offer more freedom in what is possible to accomplish, according to the folks at Norrkross. VideoCanvas is more basic than Final Cut Studio and Shake, both in that it is lacks some of the features, and that it requires much less training.