The future of movie watching: Ultraviolet and digital downloads

In July 2010, a group of media and electronics companies have announced an agreement on an all-formats system called UltraViolet for digital downloads. The single standard will, at least in theory, allow the consumer to purchase films to be viewed on any device — a computer, smartphone, game console, Blu-ray player, and television. And it sounds like something Apple would like, but that remains to be seen.

With UltraViolet, due to start rolling this spring, consumers will purportedly be able to shop at their choice of participating retailers — including stores with whom they already have relationships. A few clicks will link a retail account to the UltraViolet Account. Then consumers simply shop as usual; when they make purchases, a right is automatically added to their UltraViolet Account, unlocking the benefits of UltraViolet

However, UltraViolet could end up in a format war with Disney’s Keychest. Apple might side with its buddy, Disney (Apple CEO Steve Jobs is on the Disney board of directors) or decide to do its own thing, resulting in a format war.

Disney officials said the goal of KeyChest is to make it easy for viewers to see a movie accessed from various outlets and to address the issue of compatibility in maneuvering content from device to device as well as limited storage space on consumers’ hard drives.

With KeyChest, a consumer can buy a movie from a participating store. That customer’s account with other participating services, such as telecom services or cable companies, would be updated to show the film is available for viewing. Purportedly, Disney envisions KeyChest as a program that retailers can tap into to verify that consumers have already purchased the right to access a movie, and then make that movie available to the consumer across different devices.

As for UltraViolet, as Peter Kakfa of All Things D (http://macte.ch/7OVrR) notes, the fact that Apple isn’t playing along is a huge problem. “… Steve Jobs has been very successful at tending a walled garden. And if UltraViolet really works, it means he’d be letting someone else manage Apple customers’ media, and letting all that work he’s put into nurturing the Mac/iTunes/iOS ecosystem go to waste.”

What’s more, the effort faces some big obstacles, including the fact that some critics have complained that UltraViolet is just another form of DRM (digital rights management) in disguise.

So don’t expect Apple to jump on the UltraViolet bandwagon. But will it go with Disney’s Keychest? Come back Monday …. 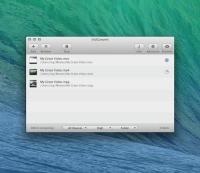