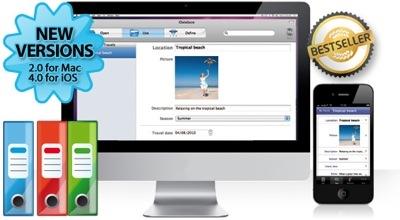 Apimac has updated iDatabase (http://www.apimac.com/idatabase/) for the Mac and iPhone to versions 2.0 and 4.0, respectively. New to the updated versions are:

° The ability to duplicate a database containing all the records;

° The ability to create a clone without records of an existing database;

° The ability to export a database by email;

° The ability to send one or more records via email as PDF, as a card or as a CSV file;

° The ability to navigate through the records with new Previous and Next buttons;

° A new import preview view which allows you to define the fields and their labels, and to see a record preview before the import;

° The ability to set, in both import and export, the first record as record value or as field label;

iDatabase is a personal database manager that offers a way to organize your information and data. With it Mac and iPhone users can manage membership lists, expenses, projects, keep track of internet accounts and more. Users can choose from 16 ready-to-use, customizable database templates to organize any type of information or can create a totally new database from scratch.

iDatabase for Mac and iDatabase for iPhone can be synchronized via Wi-Fi. iDatabase supports Backup and Restore, Exporting and Importing of databases in .idatabase and .CSV formats (the iPhone version via the service online Dropbox). The .idatabase files preserve the complete content and structure of the database, including pictures.