Comcast has unveiled its free Xfinity TV app, which will enable Xfinity TV digital customers to watch TV shows and movies directly on the iPad, either at home or on-the-go in the coming weeks.

Beer Beckmann has announced Jan-Ken-Pon 1.0 for the iPhone. In the US$0.99 rock-paper-scissors game you can battle via Bluetooth and surprise your opponent and more.

Appuous Inc., a software development company founded by high school junior Austin Evers, has released Shuzzle, a $0.99 puzzle and shapes game for iOS devices running iOS 4.1.The game challenges players to match shapes to colors while under the stress of a timer.

UBM Medica has launched PhotoClinic Mobile, a free iPhone and iPod app that enhances physicians’ clinical proficiency through diagnoses and treatments. Drawing from the popular DermClinic and PhotoClinic sections found on ConsultantLive.com, this application features images, submitted by primary care clinicians, all specially selected by the “Consultant” editorial staff for both their teaching value and seasonality. PhotoClinic Mobile isl intended to help physicians diagnose and treat their patients, right at the point-of-care.

Parents are now able to monitor their teens’ activity on Facebook through a free iPhone application for supervising social media postings by kids, used with GoGoStat Parental Guidance by Schakra. One of the sponsors of the International Bullying Prevention Association conference beginning today in Seattle, GoGoStat Parental Guidance Mobile lets parents stay in the loop when it comes to inappropriate social media postings, contacts or cyber-bullying in which their teens may be involved.

Photo Delight on iPad ($1.99) is a new app that provides features such as importing
photos from your Facebook world including photos of your friends, color-splashing them, sharing on the social media and also printing them using Apple’s AirPrint feature.

Yasmin Studios has introduced Magic Goldfish — Children’s Interactive Storybook HD 1.0 for iPad, their latest interactive eBook. The $0.99 ebook tells the story of a humble fisherman who meets a magical gold fish who grants him any three wishes he desires. This interactive eBook features life-like graphics, narration, optional symphonic musical accompaniment, characters that can be moved and respond to touch, advanced lighting and animation effects, and more.

Marcel Badreev has debuted Eid ul Adha 1.0 for iPhone, iPod touch and iPad users. The $9.99 provides visual and audio instruction for those observing the Eid ul Adha holiday. Users have access to photos, text and audio files to learn the proper Eid prayer and about the Takbir, as well as details about the Eid ul Adha festival.

iStoryTime has published Meet the Fraggles — Kids’ Book 1.0 for the iPhone and iPad. Based on the hit series “Fraggle Rock” from The Jim Henson Company, the $1.99 app is narrated and featuresoriginal artwork. The official guide to entertaining Doozers, Fraggles and Gorgs. Pages can be turned automatically or manually depending on the age and preference of the user.

Viaden Mobile has rolled out All-in RunMeter GPS+, a $2.99 pedometer for iOS devices that works both with accelerometer and GPS. It sports distance tracking and shape monitoring features. The use of the GPS technology allows RunMeter GPS+ to count steps and track stats in the background mode.

Mathieu Brassard is offering Discover Musical Instruments 1.0 for iOS, designed for babies and preschoolers. The $1.99 app shows 36 pictures of musical instruments, their sounds and also the correct pronunciations of their names. Touching the picture will reveal the sound the musical instrument makes, and touching the name will pronounce it.

EmirBytes has produced Camera Spot Fix 1.0 for the iPhone and iPod touch. The $0.99 app offers a solution for the devices’ blue spot/tint issue. The application’s algorithm uses an exponential color fixing process.

Infinite Dreams has announced Let’s Create! Pottery Lite 1.0 for iOS devices. The free “pottery items” and share them with your friends.

Appventors has unveiled the Santa Mega Pack app, which combines 10 apps in one. The $0.99 app helps to manage kids’ Christmas lists, inform family members of gift preferences and to encourage angelic behavior by having Santa call children to deliver a special message.

Global Delight has launched Photo Delight 1.0, a color splash application for the iPad. The $1.99 app has a virtual canvas to place your color photographs on and get going. You can add color to any part of the automatically converted black-and-white photograph with swipes of your finger and see the effect. Photo Delight also comes with a smart integration with Facebook allowing you to import pictures from your own or your friend’s account.

Troi Automatisering has debuted QuickTrans 1.0 for the iPhone, iPod touch and iPad. It’s a $14.99 iOS app for sending images. After you configure QuickTrans once, you can take one or more photos and upload them without any extra steps. It can also add (GPS) location data and your own text to the image.

Portal has announced iDiscipline HD 3.0.1 for iOS devices. It’s a $3.99 tracking system that assists teachers in the classroom as well as a tool to communicate with parents regarding their children. iDiscipline HD collects the data the teacher enters, and when the teacher is ready to contact the parent, all the data is in their hands. Infractions can be sent via email, whether it’s just one or all the infractions a particular student has received.

Apps On The Move has released Trunk Notes 2.4.0, an update to their $4.99 personal wiki and note taking app for iOS devices. It’s designed as a solution for users who want to store hundreds or thousands of notes. Notes are linked together and can be browsed just like a web site with familiar home, back and forward buttons. With version 2.4.0 users can use Trunk Notes on all their iOS devices and sync their wiki notes, images and sound recordings with Dropbox.

Jury Shortki has introduced Towers vs. Dragons 1.1.1 for iPhone, iPod touch and iPad users. The $0.99 game combines tower defense and line drawing. Players can draw traps, build towers and harvest mana as they work their way through the game, killing as many flying dragons as they can. Each of the game’s 15 levels introduces new elements for slaying hordes of dragons and defending the kingdom. Game Center ready.

InfiniteNIL has updated its $1.99 PhoneWord iOS app with a completely redesigned user interface and additional functionality such as integration with Contacts. PhoneWord finds vanity phone numbers called phone words. PhoneWord can find phone words from phone numbers chosen from the contacts or by manually entering a phone number. Users can save notes to their contacts for the phone words they find. Phone words can also be shared via social networks and users can create their own custom dictionary. 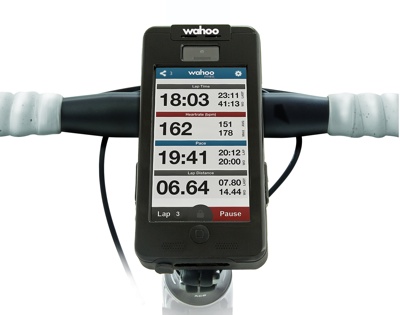 Wahoo Fitness introduces the PROTKT for the iPhone