I’ve been reading the tech tea leaves lately, and I’m predicting that within two years, perhaps sooner, Macs will ship with no optical storage or hard disk drives. In other words, the new MacBook Airs are a glimpse at the future of most all Macs, not just Apple laptops.

My forecast is that all Macs — except the Mac Pros — will, sooner rather than later, ship with SSDs only. As prices drop, the capacity of the SSDs will increase. Still, it’s going to be a looong time before they’re price comparable with hard disk drives (HHDs), and folks need ever-bigger HDDs as their digital content increases. Though some companies might want you to store all your data in “the cloud,” I contend that most folks will also want a local copy — as in their home or office — of their tunes, movies and photos.

For this reason, I think Apple will begin selling its own line of HDDs when the Mac line moves to all-SSD (excepting, as I’ve mentioned, the Mac Pro). One advantage of this is that you’ll be able to move data on these external hard drives from one Mac to another with ease.

Also, in my forecast, the portable SuperDrive, such as Apple offers for the MacBook Air, will be the de facto SuperDrive for all Macs but the Mac Pro. That will shave a few points off the price of a Mac (well, at least it will once SSD prices drop). And this will also offer the advantage of having a SuperDrive that can be used with multiple Macs.

I doubt this will happen, but once Apple goes this route, I’m hoping it adds Blu-ray playback support to the Mac OS X. That way, we can play our Blu-ray discs on portable Blu-ray players offered by third parties (I suspect OWC and WD, among others, will jump on that bandwagon.)

The final piece of my prognostication is that these future Macs will abandon USB and FireWire and go straight with Light Peak technology.

All this means that Apple will continue its move toward ever-more-streamlined Macs. Macs that will still remain the center of our “digital lifestyle.”

Deals: Clean Text 48% off today only 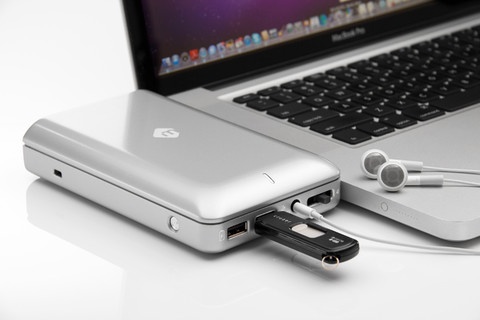 mDock turns your MacBook Pro into a ‘desktop’ computer