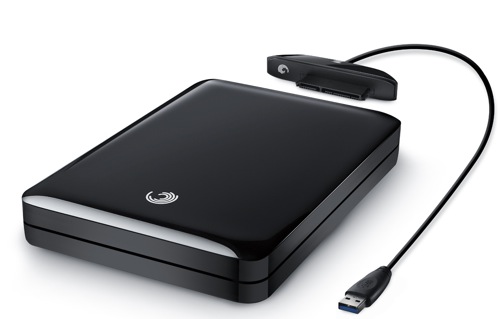 Seagate (http://www.seagate.com) has launched what it says is the world’s first 1.5TB, 2.5-inch portable external drive. Available immediately, the new 1.5TB FreeAgent GoFlex comes in black and has a suggested retail price of US$249.99.

With 1.5TB of capacity people can now store and carry up to 60 HD movies, 750 video games, thousands of photos or tens of thousands hours of digital music, says Darcy Clarkson, vice president of Global Retail Sales and Marketing for Seagate. Shipping now in the United States and rolling out globally later this year, all 1.5TB GoFlex ultra-portable drives will ship with a USB 3.0 interface cable, accelerating the transfer speed of a drive up to 10x when connected to a USB 3.0 port, when compared to a USB 2.0 port. Unfortunately it will only run at USB 2.0 speeds on the Mac since it doesn’t yet support USB 3.0.

Each drive includes an NTFS driver for Mac, which allows the hard drive to store and access files from both Mac OS X and Windows computers without reformatting. The NTFS driver is simply installed once on the Mac OS X computer, allowing it to read and write files on a Windows formatted drive.