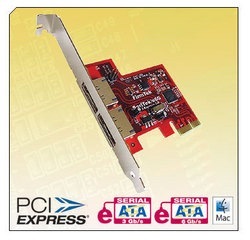 The SeriTek/e6G can be used without installing a driver with Mac OS X 10.5.x or 10.6.x systems. However, if the FirmTek driver is installed customers can take advantage of advanced features like port multiplication with SMART application support, optimized enclosure performance, hot plug support for Oxford 936 based enclosures and Mac OS X 10.4.11 compatibility.

‘Lord of the Rings: Return of the King’ in QuickTime