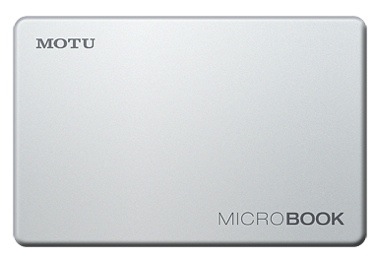 MOTU has announced the MicroBook (http://www.motu.com/marketing/motu_products/audio_interfaces/microbook/), a USB bus-powered audio interface that purportedly delivers studio-grade audio performance in a compact size small enough to fit in your pocket. The MicroBook — which will ship next month and cost US$269 — turns a Mac or PC computer into a personal 4×2 recording studio with audio I/O and mixing.

“The MicroBook is small in size but huge when it comes to audio quality,” says Jim Cooper, MOTU marketing director. “Our tests show that it matches or exceeds the measured audio specifications of other so-called ‘high-end’ interfaces on the market that cost two and three times as much. So it’s perfect for discriminating users who want quality I/O for on-the-go recording, personal studio tracking, laptop-based DJing, and many other applications.”

Due to its slim form factor, the MicroBook’s mic input is a balanced quarter-inch jack. If a user would prefer to use a mic cable with an XLR plug, the MicroBook package includes an XLR-to-quarter-inch adapter. True 48V phantom power can be enabled, powered by the MicroBook’s USB connection to the computer.
The MicroBook’s Precision Digital Trim feature provides digitally controlled analog trim on all analog inputs. The guitar input provides the proper impedance loads for guitars, so users can play through guitar processing plug-ins in their host software. To make host plug-ins feel and sound even more like a real classic guitar amp, users can connect a MOTU ZBox impedance adapter.

The “mini” eighth-inch analog input can be used to connect an iPod or other stereo line level signal. Audio input can be mixed with other inputs and routed to any output pair. For example, a user could plug in a guitar and rehearse with a mix from his iPod. Or the input signal can be routed to the computer to be recorded or mixed in host software.

With its internal mixing and routing features, the MicroBook lets users program up to five different stereo mixes consisting of any combination of inputs and host audio tracks. So the main outs, stereo “mini” out, and phones can each produce an independent output mix. Alternately, users can send the same mix to multiple outputs, or employ a separate output for the MicroBook’s built-in test tone generator or white and pink noise generator. The S/PDIF digital output mirrors the main outs.

Apple one of the ‘coolest companies around’ 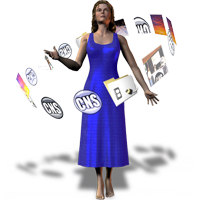