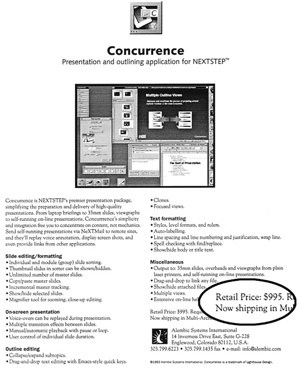 The former Sun Microsystems former Vice-President (five various positions), Chief Operating Officer, President, and Chief Executive Officer Jonathan Schwartz, wrote on his “What I Couldn’t Say” blog (http://jonathanischwartz.wordpress.com/2010/03/09/good-artists-copy-great-artists-steal) last week about a 2003 threat of future legal action that he claims Steve Jobs made to his office in a telephone call while raising the idea  that the graphical effects of a Sun prototype Linux desktop may be violating Apple’s intellectual property (if Sun commercialised that prototype).

Schwartz wrote his reply was simple and left Steve Jobs silent without a response. The reply mentioned how he had been watching a recent presentation of Jobs and how Apple’s newly released Keynote presentation software looked identical to Concurrence and if Jobs/Apple owned that intellectual property.

Concurrence was a software product previously developed and owned by Lighthouse Design, a company Schwartz co-founded before Sun’s outright purchase of the company in 1996 for $22 million. (Five founders, $22 million – was it eight years effort?)

Jobs made no response to the question if he owned the IP and the matter was never raised again supposedly.

This revealing story was well covered on the internet reporting last week, most of them indicating Jobs or Apple as a lawsuit crazy bully and Schwartz and Sun strong and intelligent and standing up to the threat. A few covering the story raised intellectual property (IP) issues surrounding “look and feel”  protection and types of IP concerning software (patents vs copyrights).

I thought it might be helpful to review developments surrounding Lighthouse software, Schwartz and Sun for some younger readers to set out a more complete picture..

I disclosed that I believe I had the first Mac in China (19 February 1984) in my last article “Donovan’s Views: Fleishman vs Enderle – mano a mano.” I unfortunately can also claim I was told by the salesman to have had the last NeXT hardware purchase in Hong Kong (and probably Asia ex-Japan) with a NeXTCube (late November 1992) before NeXT stopped making all hardware on 9 February 1993 (known as “Black Tuesday”). I won’t scan the receipt or the welcoming letter from Todd Rulon-Miller. Now there is a name from the past.

Through that purchase and further work at a bank, I came to know some of Lighthouse’s software products through actual use and remember them very favourably. But I also recall some other points that should be brought out. Let me present some of those points and you can draw your own conclusions.

Schwartz formerly founded Lighthouse Design with a small group of other people and sold a variety of excellent NextStep/OpenStep software programs. They were mostly in the office productivity genre of software – presentation, speadsheet, diagram, database, word processing, drawing, task management.

The presentation product Schwartz mentioned to Jobs was called Concurrence and it was sold for $995 per copy. The smart street shoppers could find it priced at $695 with mail-order software outlets in the winter of 1994.

Shown is a scan of the Concurrence marketing sheet with features listed and with $995 retail price suggested enlarged.

The Lighthouse spreadsheet products (ParaSoft – traditional spreadsheet, Quantix – multi-dimensional spreadsheet) were selling for $595 and $895 at a mail order outlet while the word processor product OpenWrite sold for $395.

The word processor program Lighthouse carried was called OpenWrite. The below is copied out of its Read-me file: “OpenWrite 2.0 will begin shipping in mid-December for the SPARC-, Intel-, Motorola-, and HP PA-RISC-based versions of NEXTSTEP 3.2 or later. OpenWrite is priced at $495. OpenWrite 1.x users can upgrade to OpenWrite 2.0 for $99. Site licenses are available and OpenWrite is included, along with all other Lighthouse products, on a heavily discounted Academic CD. The next Academic CD will be available in late December.”

Lighthouse was purchased by Sun Microsystems in mid-1996 for $22 million and Schwartz being one of the five founders probably made a few dollars out of the deal. Most of the small team of engineers and programmers went over to Sun where they were going to be involved with some NeXT collaboration with Sun. That plan was nixed as the deal went through and the Lighthouse suite of products were never again seen in the marketplace under the Sun brand. Schwartz continued upwards in the Sun organisation growing influence, obtaining new titles, and eventually ran it in 2006.

We know how that company story ended. He aided running it right into the ground and it was sold to Oracle.

But Schwartz mentioned it was because of the bad timing of the global financial crisis. Or was that just really bad haiku?

The Register reported that Schwartz commented in September 2003, then head of the Sun software division (from 2002) that the acquired Lighthouse products long held (from 1996) would probably never again be offered in public.

This 2003 comment was probably made to silence the continued calls from former NeXTStep and OpenSTEP users for the very same product and features that Lighthouse had (instead of Sun just sitting on the products).

Sun, and in the latter years Schwartz, did not budge from the position in April 2006 (nearly three years later) when he became President and CEO of Sun. There were former customers of Lighthouse asking for a known products by name in hope they would be available for Mac OS X and the executive decision was to sit on the old products and intellectual property and not develop them.

I wonder why they just did not sell the software off to another group (possibly Steve Jobs and Apple?). Was it to fend off someone else with less deep pockets from undertaking moves in that direction?

Anyway, such behaviour should make you wonder about business acumen of Sun executives of the day. It does seem that potential customers asking for formerly expensive products they held were ignored.

Fortunately Steve Jobs moved the necessary Apple corporate resources and programmers to develop the Keynote application as his own corporate presentation work demanded something better than Microsoft PowerPoint (if he or I would ever use it!).

Keynote version 1.0 was released in January 2003. There were two more revisions released within 2003 and we now know Schwartz and Jobs had “talked” on the phone sometime during this year. Remember Jobs was apparently scared or shocked to have a response to Schwartz’s sharp remarks of who owned what intellectual property.

Or maybe Jobs was trying not to say anything impolite as his mother taught him? Sometimes actions, including silent ones, speak louder than words.

The Keynote software was released and reviews were very favourable. The uptake among Mac OS X users was strong. Keynote development continued steadily and version 2 shipped two years later in January 2005. By then, it was sold in a combined package called iWork ’05 and included (surprise, surprise) a word processor and layout program called “Pages”. It can be compared with Lighthouse’s $395 word processor OpenWrite. (Remember Concurrence street price was $695.) The whole iWork package cost $79.

I think Lighthouse products could have been in that marketplace with the smallest of efforts if Sun had taken a different executive decision.

By August 2007, iWork added yet another application and included the spreadsheet program “Numbers”. It is comparable with the $595 ParaSoft and included enough multi-dimensional elements to it that $895 Quantix can’t be ignored either when discussing it. The price of iWork ’07? The same $79.

And now on the horizon, we lucky users will have the choice of paying an additional $9.95 for the new iPad platform version of each of the three iWork applications just next month.

Sun and Schwartz have lost much of their spotlight and here we are discussing about his wonderful legacy Lighthouse products they deliberately allowed to stay out of the market. This time lets switch to baseball terminology. A triple play is three outs.

I have a new naming suggestion If Jonathan Schwartz starts a new blog  from his current “What I couldn’t say” to “Real results speak louder than silly revelations.” 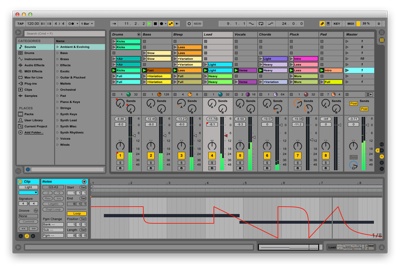