VMWare has released VMware Converter 4.0. You can
run this virtual machine on Macs as well. VMware
Converter enables you to convert Microsoft
Windows and Linux based physical machines and
third party image formats to VMware virtual
machines.

° Hot cloning improvements to clone any
incremental changes in the physical source system
during the P2V conversion process;

° Target disk selection and the ability to
specify how the volumes will be laid out in the
new destination virtual machine; 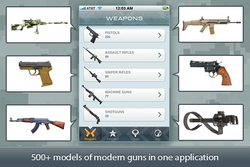 Arm Yourself With A Weapons Catalog